Survival 4 was the fourth era of Survival Multiplayer worlds on the Dogcraft Server. It was launched on the 1st of April, 2020, succeeding the Survival 3 world, bringing with it the update to Minecraft 1.15: The Buzzy Bees, a new Dogcraft.net website and a total reset of Dogcraft Dollar balances, claim blocks and previous purchases. Survival 4 also marked two other major changes: A move to dedicated server hardware and the first Survival season to have multiple "sub worlds" with the addition of Beagle and Husky. The Survival 4 worlds were supported through two major Minecraft releases - to 1.16 on 24th July 2020 and to 1.17 on 28th August 2021.

Unlike all prior Survival worlds, there was no single Survival 4 world. Rather, there were two interconnected worlds for players to build and explore on; "Husky" and "Beagle". Both worlds had different seeds as well as separate Nether and End dimensions and could be freely traveled between. They each had their own maximum player cap, at 55 players each. Both world spawns followed the same summer camp theme. However, although they were separate worlds, player data was shared between the two. This meant that player inventories (including mob eggs), armour, experience, levels, advancements, potion effects and Ender Chests were shared between the two worlds. The Nether dimension in each world was reset as part of the update to Minecraft 1.16.

After over a year and a half, some players began raising questions as to the longevity of the Survival 3 world, as it was on its way to becoming one of the longest lasting worlds on Dogcraft. However, poor performance following Survival 3's update to Minecraft 1.14 and the poor chunk-loading behavior that brought with it built anticipation for an update to the next version, 1.15.

Scooberson that the Dogcraft Server would be updating and that after that Survival 3 would soon be ending to make way for a Survival 4 world as a result of the need to transition to new hardware. Some details about the new world were revealed, such as the removal of the world border and the fact that it meant a total reset of claim blocks, purchases and DCD balances. It was also announced that Survival 4 would update to Minecraft 1.16 upon the version's release, meaning that the nether would need to be reset to allow for the new generation.

Player reaction was largely positive to the announcement, with the majority welcoming the upgrade. Some players were upset about the removal of all claim blocks and player balances, however unlike the transition from Survival 2 to Survival 3, players were optimistic thanks to the advanced notice given by leadership and much better organisation.

"We are going to open a second world that is an extension of this current world." simply_simon_

Survival 4's opening day was heavily plagued by various lag and chunk loading issues caused by the strain of over a hundred players on launch. These issues were such that many considered the server unplayable for the first few days. Several plugins were disabled throughout the following week, and player numbers began to drop slowly, to around an average of 70. Many aspects of the server improved significantly, especially chunk loading and mob spawning, and it was widely noted that the new hardware was performing better than the old given the circumstances. Nevertheless, the server was still not an ideal experience, and crashes became very frequent at the end of the first week, as did persistent issues with warps.

simply_simon_ on the 7th of April. The announcement detailed the planned solution to the various lag issues. A second overworld would be created and would function as another dimension, with inventories, ender chests and experience levels all retained when teleporting between the two. This would allow Minecraft, a 'single threaded' game, to be run across two single threads, one computing a separate overworld each. The new overworld would feature it's own nether and end dimensions which could also be teleported to from the other nether and end. Chat and 'Tab' screens would be shared, as would moderating tools. The new overworld would be called Camp Beagle, and the original renamed Camp Husky, in reference to the camp style spawn builds they have. Beagle would launch on the 11th of April, the same day as a player cap would be placed on the server for the first time, of 55 (including five spaces reserved for moderators) for each Camp.

A number of new features and changes were added alongside the transition.

As had become customary, the player count during the Survival 4 era stabilised after its first few weeks and was somewhat similar to the previous Survival 3 for much of 2020. During 2021, numbers slowly decreased, and had dropped relatively low by the 1.17 update. By the middle of 2021, it was commonly said that Husky was the more active of the two worlds. Despite the expansion to home accessibility with the addition of public and universal infinite homes, transport and infrastructure networks maintained a high status and became further entrenched. The Survival 4 era, in large, saw the descent of cities from their place as one of the highest cornerstones of Dogcraft culture, and they generally struggled to gain the hype of previous eras. Official and one-off player-run events became more frequent, with the addition of smaller live activities to the existing Events Team repertoire of large activity areas combined with more player-run events providing much colour to the community. 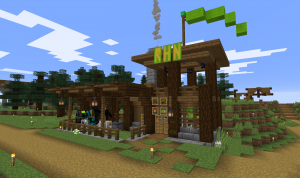 The Road and Horse Network (RHN) and road networks as a whole made possibly the biggest impactful addition to the Dogcraft landscape during Survival 4. Founded by

_edo during July 2020, after suggesting a channel dedicated by roads within the SRN/NTN community, the project quickly drew the attention of many players and particularly those based near spawn. The roads were designed with specifications that enabled horse travel throughout the world. The network expanded it's mode of operations from one-off roads to standardised signage, shelters, signposts, and maps, much of this driven by

_Shako over the course of 2020. By the conclusion of the world, the RHN had connected every corner of the Husky spawn continent, with branches providing outreach over 7km from spawn. It provided an alternative to the structured building and travel that the existing transport networks provided and very quickly became embedded as an essential part of the Dogcraft psyche.

Also noteworthy is that the RHN focused exclusively one world - Husky. A Beagle semi-equivalent, the .Path Network Group, was also created during 2020 and was successful in its own right.

The Survival Railway Network (SRN) returned for it's fourth iteration and continued to be a successful project by connecting major locations using it's four main line structure and community orientation. The new subworlds posed a challenge for the network, given it's concept is rooted in physical space. The SRN built on both worlds and maintained a worthwhile size, with each world totaling only slightly fewer stations (19 & 20) than the previous Survival 3 network (24). 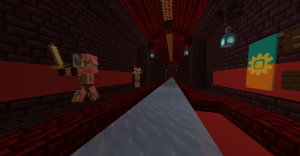 A stretch of NTN Tunnel on the West track

The temporary nether dimension to start the world did not stop the NTN from expanding to new heights. The four ice-track structure with surrounding ring at 15,000 blocks remained but was expanded to 30,000 blocks and a second ring to provide high-speed transport coverage to more places. The entire project was functionally completed by the end of 2020 despite the permanent 1.16 nether launching in July of that year. For the further portion of Survival 4, the NTN hosted its first competition style event to increase the number of player stops and to complete the overworld side towers of each boundary of the tracks. 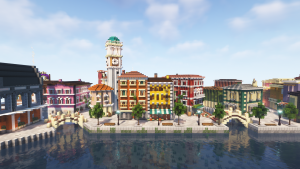 Founded at the beginning of Survival 4 by a council made up of members predominantly from previous projects such as Hydropolis, Chronia and Erebus, Gaia became one of the biggest cities by landmass to on Dogcraft to date. Built in a Mediterranean style featuring many canals and an entire mountain range, Gaia had a high number of player contributions and hosted a handful of well-attended events.

Founded at the start of the world as a spiritual successor but a predecessor in lore to the Survival 3 city Erebus, Alina was the biggest settlement on the Beagle world. It was built in a plot-based manner with a liberal view on design specifics aside from a bright mood.

Started by a few members of the Survival 2 city Havana on the first day of the world, Takeshi was a tightly packaged project in a modern Asian style. Despite staying under the radar for 2020, Takeshi became well-known in the latter half of the world with the core player base due to further expansion and series of public events. 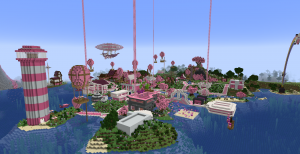 Possibly the only city of Survival 4 to gain a significant amount of hype and public chatter was PinksVille. Born from

_Skyhook's pink Valentine's Day themed player skins at the start of February, the impromptu town quickly gained momentum and became the must-see project on the server throughout the month, with significant chunks of the players online at any one time building there. Although the hype died down nearing the end of February, PinksVille wound up with a captivating set of exclusively pink coloured builds in a very short time.

One of many official Events Team constructed event areas, Halloween stuck out because of it's unique activities, such as a music quiz and death by trivia, and it's large scale. It was the most notable events area for years in terms of player engagement, partially because of a streamed ReNDoG visit, bringing new players to the server specifically to enjoy it.

Speculation throughout the player base pertaining to the closure of Survival 4 was regular in the leadup to the release of Minecraft 1.17, and then again before the release of 1.18. On the 3rd of January 2022, Headmod

Scooberson announced in advance that the update to 1.18 would be the start of a new set of worlds on the Dogcraft Server, and that the existing Survival 4 worlds, Husky and Beagle, would be closed. General reception to the announcement was almost universally excitement. A further announcement on March 1st confirmed that Survival 4 was planned to close on March 14th, 2022, and it did so.