"The aim of this city is to create something which feels alive, and has a tightly-knit community around it." DragonFire441

The City of Gaia, or simply Gaia, was a Mediterranean-style city on the Survival 4 Husky world of the Dogcraft Server. Inspired by Venice, Gaia featured twisting canals cutting through a densely packed urban landscape. The city was founded on the launch day of the Survival 4 world; the 1st April 2020, by a council of people comprised of leaders of Survival 3 city projects such as Ouranos, Chronia, and Erebus. Development within Gaia continued through the final days of Survival 4 in preparation for the World Download.

The main part of the city was a Venetian-style complex with canals running throughout the city creating another way for players to travel throughout. This area was positioned at the southern bay such that the south end of the city bordered the sea. At this border, there was also a commercial harbor connecting the city to the outer world. Surrounding the eastern and western fronts of the city were large granite mountains, terraformed by the Council and Senate members. An airport could be found on the northern side of the city.

Instead of plots with a specific layout, the Council granted people more flexibility with their building areas. Because of this, people were given larger plots of land to develop within allowing them to be more creative with the shape of their structures. The intent was to create a more interesting and developed area. The leadership encouraged builders to stretch themselves and to try more complicated techniques such as diagonals. Since the style of Gaia was rather specific, and to maintain a level of quality, all potential citizens (called Applicant Citizens) were required to build a small sample of their build in creative prior to building it in Survival within Gaia.

The style of buildings within Gaia was, as previously mentioned, Mediterranean. The general era was Renaissance, and thus was mostly based on terracotta, stone, sandstone, brick, etc. with less emphasis on wood as would be seen in medieval builds. Numerous reference images and ideas could be found within the #inspiration-images channel on the Gaia Discord. 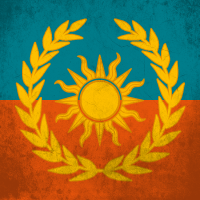 Gaia is the name of the Greek primordial goddess of the earth (being the daughter of Chaos). Naming of the city Gaia followed in the Dogcraftian tradition. The symbolism in our logo was twofold: the sun represented the Mediterranean climate, and the laurel wreath linked to both the heritage of this part of the world (being a symbol used by both Romans and Greeks in antiquity), and also being a symbol of plants coming from "Mother Earth". The Blue and Orange represented the granite mountains reaching up into the blue sky.

The Council Members are:

marbou9, the first citizen of Havana.

William278 from Ouranos and

While this was a large group, the culmination of collective experiences lead to the creation of a city which met the aims outlined above.

By the end of Survival 4, the City of Gaia was full of numerous builds of homes, businesses, and city services. There were too many to list them all, but below is a partial list of several of these builds.