The Creative world is a superflat world with plots in which players can claim and build in using Creative Mode. The world has had several iterations and is currently on its third.

The original Creative world was launched on the 28th of September, 2015 alongside Survival, MCMMO, Amplified and Skyblock, consisting of a superflat world with 16x16 plots and 32x32 plots available. Signage and infrastructure was minimal. An admin was needed to assign players to their plot, which are believed to have cost between 5000 and 10,000 dogcraft dollars. Larger plots did exist and are attributed to 'asking an admin nicely'. The biggest known plot was 128x128.

Some time in mid-2017, Creative was re-organised. Although builds from the old arrangement were reset, the same world was used. Paths were made and plots became uniform 52x52 spaces of lime terracotta. The price of a plot was 20,000 dcd. 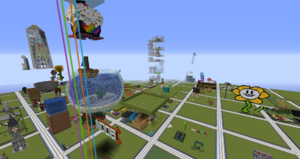 The second iteration of the Creative World

When the server transitioned from the original worlds to Survival 3 on the 20ᵗʰ of October 2018, Creative was closed. It was later re-opened on the 11ᵗʰ of November that year, at which point, plots became free. Players who had previously bought a plot could claim another. The same file was used, and all builds and plot owners were maintained. However, this world would fill up due to only a finite number of plots being made available.

On the 18th of October, 2019, Creative was reset and updated to Minecraft 1.14: Village & Pillage. The current version of creative uses an infinite world with pathways designed by

nossi_ and the Plot2 plugin to provide an endless amount of plots, tackling the problems with plots running out present in the previous iteration.

Plot sizes are 42x42 blocks, and are delineated by the wooden borders. Plots that are available have a spruce slab border, which, once claimed, changes to dark_oak slabs.

The following commands can only be used on the Creative world (Plot2 plugin commands).