Chronia, more formally referred to as The Isle of Chronia was a city on the Survival 3 world of the Dogcraft.net server. The city was founded on the first day of the world by some of the members of the Hydropolis City community on the previous Survival 2 world, by Arkhangellsk, nossi345, RY44, DragonFire441, Cookies58_ and _gewoon_iemand_, who form the "H2O" group

The city was a fantasy-inspired build on a fully-terraformed Mooshroom biome, featuring custom landscapes varying from a town area to mountains and farmlands[1], with floating islands accompanying the city in the sky. In April of 2019, the city unofficially opened for players to be able to claim a limited number of plots. 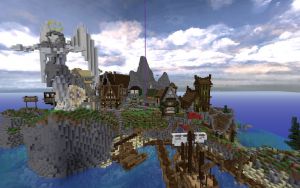 Planning for Chronia began between the previous mayors of Hydropolis, and some of the district managers and builders from Hydropolis, as soon as the resetting of Survival 1 and Survival 2 was announced. They decided to take an approach very different to the one that they had for Hydropolis: as opposed to a modern/futuristic style they decided to go for a fantasy style, focusing more on the terraforming side of building. Furthermore, they decided to have a limited amount of plots so that the town would remain relatively small, which makes the possibility of a finished state for the town more achievable.

The location was found with help from JarrydG_ZA, who had already found a mooshroom island for himself (and is also the neighbor of Chronia to the south east), meaning that the team were able to settle and start getting resources and gear. Honourable mentions to this process are the finding and transportation of a mending villager several thousand blocks to Chronia, who then settled in the lighthouse (though vanished later on), as well as the creation of a guardian farm within the first week, both of which aided progression massively.

The construction of the island took a lot of time and effort, and is made of a plethora of different stages: firstly, the mycelium was replaced with grass, after which came the terraforming of the southern coast, construction of the harbour and beginnings of the town. The town was planned out alongside the creation of some of the fields: this allowed for the town to (eventually) be opened, though without any event to celebrate it, with the first proper building having been built by almightyanna. While the town was being slowly constructed, construction started on the mountains, mostly by nossi345 with some help from Dragonfire441, taking care to build around the pre-existing spleef arena. Currently, as of the writing of this article, construction had started on the forest area which was located between the town and mountains, as well as the beginning of construction of some floating islands, the first one being built by _gewoon_iemand_.

The name of Chronia is mainly based on the word Chronos, which is the Ancient Greek for time: this relates to the floating islands, which are from an array of different styles, from different time periods. This is thus able to accommodate for different people's specialties and styles, while keeping the overall feel of the build as a congruent one. While the formal name of the island is the "Isle of Chronia", it is mostly referred to as Chronia, for the sake of ease.

The city was situated on a Mooshroom Island biome, meaning that mobs were unable to spawn on it. This allowed the city to operate safely without being fully lit, adding a wider breadth to creative play with lighting. The island was laid out with snow-capped mountains to the north and a town to the south, between which are some terraformed fields and a small forest.

The fantasy style of the city allowed for some flexibility with building, with a variety of wooden and stone buildings populating the town: some buildings having a more nordic or medieval feel, while some going for a more fantastical look. The floating islands that are around the main island added to the fantastical feel of the island, while the port area below the town furthering the more classic colonial architecture that embodies the city.

The city featured several notable builds that have various functions and offer services.

The Chronian farmlands, in the center of the island between the mountains and town.

Chronia, much like it's predecessor Hydropolis, operated several embassies in other settlements on the Survival 3 world;