For the guide on how to connect to the network, see Guide:Nether Transport Network.

The Nether Transport Network (NTN) is a community-led public transport service that runs on the Survival Multiplayer worlds of the Dogcraft Server. The system is comprised of a network of tunnels in the Nether, utilising the mechanics of using boats on ice blocks which allows for very fast movement. This is coupled with another mechanic, being that every block traveled in the nether is counted for eight in the Overworld, meaning the network allows for travel over many blocks quickly. The NTN was formed during the first Survival world and has existed in every subsequent world, with the project being led by management of the Survival Railway Network organisation.

After the announcement of Survival 5,

The idea for a nether based transport system was thought of by _edo, alongside his conceptualisation of what would become the SRN rail network. After successful implementation of the railway concept, attention was turned to its nether counterpart. 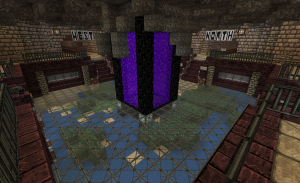 NTN Hub in survival 1, with the mini-diorama of the overworld spawn area

The first NTN Hub was built in early August 2016. It was accessible via the nether portal in a prominent plaza area of Spawn. The hub was reasonably straightforward, the main stylistic feature being the mini-diorama of the greater overworld spawn area on the central floor, based on the overhead Dynmap view.

The initial ice track design featured a dual lane system, split with iron bars, and a platform above the packed ice to prevent Zombie Pigmen from spawning in the way of travellers. Stations were interspersed along the track, providing access to the nether, ender chests, and overworld portals. Junction stations were numerous and provided access to perpendicular tracks. Both were standardised.

Valhalla Station, an example of a Survival 1 NTN Station

NTN building took priority through the August - October period and this is when the bulk of the network was created. Many NTN stations were built, most around their SRN equivalents but with a handful at other locations such as the Dogcraft Space Association build. It was apparent that junctions would be needed during this time - many SRN stations were far enough from the ice track. Hot air balloons high up in the air were constructed at some SRN station sites in order to improve the strength of connection between portals and to allow for easy elytra take-off spots during a time before rocket-boosted flight.

The NTN was not as well known or used as the SRN. The main cause of this the counter-intuitive location of the NTN hub portal. The building housing this portal had been standing for many months before the NTN Hub was constructed, and was part of the aforementioned 'utilities' plaza, next an enchanting facility and newbie gear build among others. The portal here was recognised by most the as the server nether portal, so was used for the NTN. However, the layout of the building was unnecessarily convoluted.

_edo, in line with his other concepts, believed that the building should be changed so that portal was more prominent. The builder of the building disagreed, and the portal stayed in the same difficult to access location. Another factor was some confusion as to the correct method to use the ice tracks. The mechanics of the network were not widely known, and the spawn-proofing platform limited vision. The result was that some practice was required to use the NTN to its full extent.

The NTN made a similar return in Survival 2. In this world, a server nether hub was built in creative prior to its opening, at Spawn, with a preliminary link to Spawn Station. However, the hub was built at a much lower level than the previous NTN, and did not have any amenities for boat launch. Therefore, the decision was made to construct the NTN Hub at a separate location, and link it with Grand Central Station as oppose to its Spawn equivalent. The arrangement left a rather awkward situation when entering the NTN from Spawn. It wasn't until January 2018, four months after the start of the world, that it this was fixed. Players would first need to enter the server nether hub before locating a fake end portal that would teleport them up to the NTN.

In the meanwhile, during the previous October and November considerable early progress had been made and stations began to pop up in December. The NTN Hub was outfitted with a complex boat storage system, holding many shulker boxes of boats at a time and sending them to be used. The station design was altered slightly and slow down pads, to solve a long-known issue of players struggled to 'hit the cactus' in their boat to enter the station.

_edo in March. The map was spread throughout NTN Stations and was sold for a modest fee in the Hub. Feedback on the map was positive and helped greatly with navigating the network. 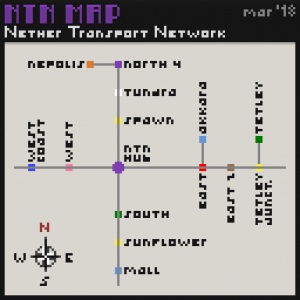 First ever iteration of the NTN Map

The NTN experienced unseen exponential growth in the month of June. A pet project of

marbou9's to extend the East track to near the world border and his private island was completed on the 12th. By chance,

Broga_ (then Brogaman) was directed to the endpoint of the Northern track to dig after asking for a place to mine for Netherrack on the 15th. After extensive digging, Broga began to build the additional ice track infrastructure and enlisted the help of many other players to complete the task of finishing NTN North and South ice tracks to the world border, with major contributors including

Mrs_Diss, who had previously completed a sizeable section of the Western track to her MicroMesa, continued the march onward by extending this track, also to the world border. By the 20th, all four tracks and five new stations had been completed in the space of eight days, over tripling the size of the network.

An additional 2x2 combined in-game NTN and SRN network map was created on the 15th of July, designed by

William278. The map was hung alongside the original one in NTN stops as well as in the counterpart SRN stations.

Further expansion on NTN from this point was limited to a handful of new stations, until the closure of the Survival 2 world on October 20th 2018.

NTN construction for Survival 3 began before world launch, as part of the Spawn building project. The NTN Hub was given more aesthetic attention than usual with a design by

marbou9, and the very beginnings of new ice tracks were in place when the new world launched. This was a very welcome occurrence, given the awkward nature of previous NTN Hub locations, and led to a major increase in the awareness and use of the NTN.

The NTN tunnels were re-designed for the world in accordance with feedback gathered of the course of the two previous iterations. A field trip to the Iskall85 server was conducted by prominent NTN players and many aspects of the nether tunnel design there were incorporated. The new tunnel was wider, lacked a lane system, and removed the need for the restrictive spawn-proofing platform by replacing packed ice with non-spawnable regular ice and careful lighting to prevent melting. The result was a tunnel with much more freedom and vision for the traveler with limited downside, whilst allowing much more accessibility to non-station connections (later coined 'side-doors'). Improved vision allowed for distance markers in overworld blocks to be added to the ceiling of tunnels, a useful guide for players. 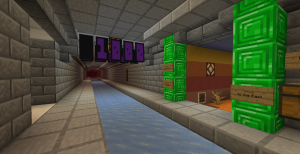 Work on expanding the NTN began very early into the new world, an effort again headed by

Broga_. With a large collection of helpers, he had completed all four NTN tunnels to the world border by the 11th of November, less than a month after the opening of the world. New side-doors began to pop up around the network, to great effect. However, efforts to build stations had been confused after mixed feelings about a new design created in November. A second re-design was made much later in March 2019 by

darparniox. This was more discreet than previous examples, reflecting a new lower emphasis on SRN connections and toward player bases and towns as well being more customisable aesthetically. Later, in May, an 'approved stop' design was created after demand for a door for more significant locations outside of full stations.

With probable world border expansion for the 1.14 update looming,

SJONES1997 began to extend NTN North past the border and toward the future border, with a 1000 block section completed in May.

Broga_ and company once again performed significant tunnel construction, completing each track to the same distance through June. 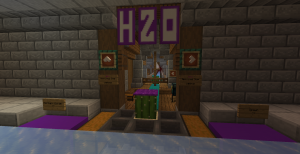 The approved stop for Chronia

The even more ambitious 'window-box' project was devised by

Broga_ following the rush of players brought by the SRN and NTN base tour video in early July. The window-box consisted of a loop track of ice following the 1.13 world border, adding in four new world corner stations and forming a window box shape with the existing cardinal tracks. The original border stations by this time resembled 'mini-hubs', with three tracks departing from them. The project was completed on the 9ᵗʰ of August after many hours of work from many players.

From this point on onward, the NTN was considered 'complete', and the only new activity was the construction of new stations, stops, and side-doors. Unfortunately, the planned border increase only took effect with the server update to 1.15 on the 20th of March 2020, and could only be opened from then, around a week before the closure of the world. Overall the Survival 3 NTN was clearly the most used and recognised, which can be predominantly attributed to the improved design and portal location.

The beginning of Survival 4 was started in 1.15 nearing the release of Nether Update 1.16 so the NTN started out as a temporary design waiting for the reset of the nether. Upon the reset, the NTN team lead by

Dmgdog would go on to dig and build a network built with netherbrick and red netherbrick for the dual purpose of highlighting the update of the nether and repurposing the netherrack mined during the dig. The tunnels featured a new arched roof making the tunnels taller.

There would be a change in leadership during survival 4 from

Broga_ to then officer