The Starter Supply Depot (SSD) was a project supplying equipment to new players on the Dogcraft Server, originally founded by

The project was funded through player donations and accepted items such as iron, tools, armor, and food. It did not, however, accept donations of any late-game items like diamonds.

The Husky SSD was the original depot. It was constructed by

joseph6790. The depot contained an armor and tools station, a food station, an enchanting station, a tree farm, sheep, cow and pig containers, and a few vegetable farms such as wheat, carrots, potatoes, and beetroots. It was located directly outside of spawn. It was near the Husky Map Art Gallery and the Husky NTN Headquarters. 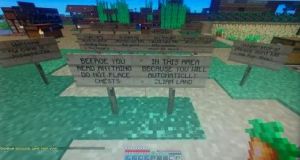 An early image of the SSD

The Beagle SSD was constructed by

TheLemonCrafter. It was mostly used as a storage area for supplies for Husky SSD.

Anyone was welcome to donate and help out if they wanted to.

Some projects similar to the Starter Supply Depot were present in earlier worlds, although not directly connected to the modern day equivalent.

Spawn had a few basic starter farms, along with a tree farm made by

_edo and a few other player-made projects that had a lot of similar resources like the SSD has in its current form.

Spawn only offered a wheat farm outside the castle, although the City of Havana did provide a few starter farms, such as cobblestone, wood, food (wheat,) and enchantments.

There were not resources available for new players on Survival 3, as in the past they caused a lot of problems for moderators. Although, there was a phantom shelter and a few donation chests for food at spawn.