The Dogcraft Server is a public Minecraft: Java Edition server dedicated to YouTuber ReNDoG. The server is formed by a network of connected sub-servers that host a number of game modes, including Survival Multiplayer, Creative and Minigame modes. Since opening to the public on the 14th of November 2015, the server has cultivated an active community of players, moderated by a diverse staff team. The Survival Multiplayer mode, the flagship mode of the server that has been continuously available since launch, is currently on its fifth iteration.

The server can be accessed via the IP address server.dogcraft.net while using Minecraft: Java Edition version 1.19.2. Bedrock connections are currently unavailable. 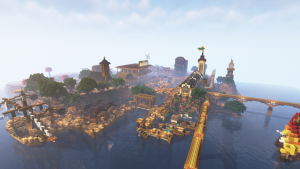 The Dogcraft Server offers a number of different game modes on its network, the most popular of which being Survival 5, the fifth edition of a long-running series of Survival Multiplayer worlds. The Survival 5 world is split across a number of different sub-worlds to support a large volume of players across which inventories and ender chests are shared; Corgi, Labrador, Shepherd and Akita.

In addition to the Survival game mode, the server has a Creative plot world where players can buy plots to build within, as well as a selection of Minigames: Nitro UHC; a fast-paced take on the popular Ultra-Hardcore battle game in which life does not regenerate and Hide and Seek; a "block-hunt" game-mode that take place in special purpose-built arenas which tasks "seekers" to find hiders disguised as blocks from the environment. Players can select which mode they'd like to play on through the /servers command.

The Dogcraft Server has an account system that ties in with the Dogcraft.net website. Players are required to register and link their Minecraft profile to a Dogcraft.net account before playing, which allows users to hold a balance of the server's currency - Dogcraft Dollars, which serves as the medium of exchange and trade on the server. Server news, updates and events are announced in the Dogcraft Discord, which has voice and text channels for discussing the server. The Dogcraft Wiki, started as a player project in 2018 and later made official, seeks to record the history of the server, documenting builds, events and progress over time. 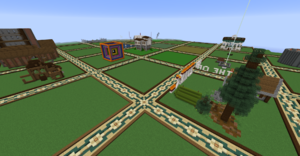 Survival 5 is the fifth Survival world on the Dogcraft server, succeeding Survival 1, Survival 2, Survival 3 and Survival 4. The world marked the server's update to Minecraft 1.18: Caves & Cliff II. The world is split into four interlinked "sub worlds"; Corgi, Labrador, Shepherd and Akita, between which inventory and ender chest data is shared, but have different seeds and contain differing builds.

Creative is currently the oldest continuously running game mode world on the Dogcraft server currently, having gone through several iterations. The world is a creative plot-world, in which players can claim a plot of land to build and experiment on.

Nitro UHC is one of two minigames available on the Dogcraft server. In Nitro, players are pitted against each other in a battle royale, gathering resources such as iron and diamonds by killing mobs to fight it out. After 20 minutes, a deathmatch will begin to determine the winner. Nitro UHC is currently unavailable.

Hide N' Seek is the second minigame currently available on the Dogcraft Server. It pits a group of "seekers" against a group of "hiders" who hide in blocks in an environment. The seekers must find the hiders and kill them to win the game, before the time runs out. Hide N' Seek is currently unavailable.

The Dogcraft Server has a number of commands and utility features to help streamline the multiplayer experience. Notably:

The server has its own set of ranks and staff members who help moderate the server. In order to play properly on the server, players must first link their account to be able to break blocks and use many commands, granting them the Cyberdog rank. Above this rank, there are tags for Patreons, Site VIPs and Pioneers (players who helped test the server).

Staff members are responsible for upholding the server's rules and helping out players by answering questions. On the server, Chat Moderators and Moderators carry out this function, assisted by monthly appointed helpers, who can help players with account linking.

For many years since the founding of the Dogcraft website, a fan server was heavily requested by players so that Cyberdogs (fans of ReNDoG) could play together and this led to numerous unofficial Dogcraft servers being created which Cyberdogs played on together.

In the fall of 2015, an Official Dogcraft Server was officially announced by ReNDoG and his staff. Plans were laid out for a full Survival Multiplayer world to be created for players to enjoy. The server launched in a testing phase on the 28th of September, 2015 with Survival 1, Amplified, MCMMO, Creative and Skyblock worlds for testers to play on, as well as a Server Hub connecting them based on ReNDoG's Mole City in his survival world. During the testing phase, only lucky players who were selected on the forums to be pioneers were able to play on the server and test out its features. The server would officially launch to the public on the 14th of November 2015, which would mark the beginnings of great expansion for the community.

Since launch, the Dogcraft Server has evolved constantly; going through numerous game modes, five iterations of its flagship Survival game mode and several hardware upgrades. Events, both community-led and server-led by the official creative team have supported its growth over the years and ensured the legacy of the Dogcraft community, which has transitioned from being a forum-based fan group in the early 2010s to the vast community it is today.