PinksVille was a settlement on the Survival 4 world of the Dogcraft Server founded by _skyhook and ChargedBluey.

Pinksville is a community project founded by _skyhook and ChargedBluey during Feb 2021. It is a project built to celebrate Valentines Day with themes of love and pink. What more could you want in February? 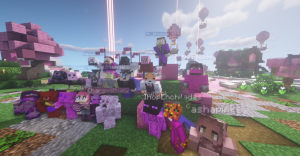 Group Screenshot with the members active at the time to celebrate the ending of the project.

Initially a joke, people began changing their skin for valentines day, the obvious theme of Pink arose. When the group of players first formed, it came off to many as a cult, however once all was clarified, more players began to join. Two staff members (_skyhook and ChargedBluey) formed a group and declared themselves as the Founders/leaders. Talk of a Hub arose as the group found an island far enough from others to build on. One player went to creative and designed the first floor of the hub with a fully functional redstone door. The project was set in stone, Pinksville was born. From this point forward, many people began building houses around the island and a path began to sprawl to each corner. Buildings big and small began popping up with no clear goal in sight other than to have fun. The most notable of the buildings was the community storage room. However as February came to a close, so did Pinksville. On the 20th of February the project ended with the area being claimed. But not without a screenshot!