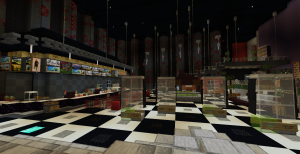 Hide and Seek is a minigame on the Dogcraft server which is modeled on the Block Hunt minigame, present on other popular Minecraft servers. In Hide and Seek, players are split into two teams - Hiders and Seekers. The Seekers must find all of the Hiders in order to win the game, and vice-versa, the Hiders must outlast the Seekers in order to gain victory. The game is 10 minutes in length.

Players can access the Hide and Seek lobby by using /servers, and join a game using /join [map]. A players stats can be accessed by using /stats [name].

At the start of the game, Hiders are given the appearance of a certain block, and are given a 30 second head-start over the Seekers in which they must explore the map to find a hiding spot for that block. Once the hider has stayed in one spot for a few seconds, they will become a solid block and are indistinguishable from any other block on the map.

Starting hotbar inventory of a Hider (who is a gravel block, in this example)

Hiders are equipped with several items at the start of the game:

In the right-most hotbar slot, there is also a representation of the block that the hider appears as.

These items can be used as defense mechanisms, or to taunt the seekers by pseudo-revealing the Hiders location. It is worth noting that the Seekers can be killed by Hiders using these items.

Starting hotbar inventory of a Seeker

Once assigned as a Seeker, players are teleported to their own Seeker spawnpoint where they wait for the Hiders to set-up. After this, the Seekers must attempt to identify Hiders and kill them. When they do, the Hider joins the Seekers team.

Seekers are given several items at the beginning of the game:

These items are used to find and kill Hiders. When a disguised, solid Hider is hit by a Seeker, they will de-solidify and become much easier to target.

After a player of either role is killed, they will spend a short amount of time in the lobby before re-spawning as a Seeker. 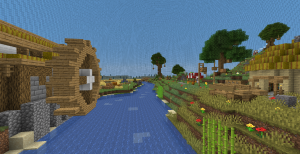 There are currently three maps for players to select from.

Shire is a large map, littered with medieval buildings among grasslands and wheat fields. 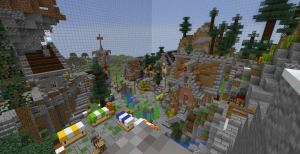 Town is a smaller map, set in a small village upon a mountain. In the center is a marketplace, and above is a bridge and tower. 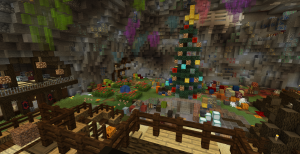 The Cavern map has many floors, each with many piles of minerals. Seeker spawn is at the top of the map, in a tree tower. The map is a modified version of

Zhul's base, from the Survival 1 world.

Coins are gained in various amounts by playing games of Hide and Seek. Being on the winning team at the end of the game grants a larger amount. In addition, Hiders can set off a revealing firework rocket in exchange for three coins.

Coins can be spent in the Hide and Seek lobby on upgrades:

Powerups are items that spawn periodically, that only Hiders can pick up. They give various single-use advantages to a Hider with one. As of November 2019, powerups only spawn during games in the Cavern map.