This is about the network on Survival 4. For the wider organisation, click here.

The Survival 4 Railway Network was a network of railways across both the Husky and Beagle Survival 4 worlds. With the mission of providing a high quality rail transport network using four cardinal SRN lines starting at spawn in either Husky and Beagle worlds. It was the successor to the SRN networks on Survival 1, 2 and 3.

The Survival 4 network was the fourth iteration of the SRN. It differed from its older counterparts as it contained 8 main lines instead of the usual 4. This was because of the addition of a second survival world (Beagle), which was added a week into the server’s life to take the strain off the first survival world (Husky). Despite having double the number of lines, the format of the network remained the same. With the iconic 4 cardinal lines running out of Grand Central Station on both Husky and Beagle.

Just like the three previous worlds, the NTN would also return to run alongside the SRN. However, the official NTN would be started 3 months after the beginning of Survival 4, due to the nether resetting on both worlds when the server updated to 1.16. Just as in Survival 3, main line stations possessed several branch line terminals, allowing for players to connect their own bases/ towns up to the network.

As of July 2021, the current network is 15 months old and has a grand total of 27 main lines stations, already larger than the previous networks total of 23. This is most likely due to the additional 4 main lines. On Husky the current longest line is the West Line, running 9895 blocks over 4 stations. On Beagle, the longest line is the South Line, running 7578 blocks over 4 stations.

The in-game map of the Husky network

Unlike the previous iterations of the SRN, the headquarters would not be located nearby Grand Central Station. Instead, the decision was made for it to be located much further away from spawn. It would also serve as the second station on the Husky West Line. The HQ was designed and built by

Skelleton123. A smaller structure was built in Husky Spawn Town by

expedtadam, which served as an information point and donation centre for the SRN.

The SRN Team went through some significant role changes in March 2020, prior to the launch of Survival 4. Long time conductor of the SRN,

darparniox, announced he would slowly step away from the role on the 15th of March. Expedtadam would be chosen as his replacement, taking the role of North Line manager as well as being eased into the role of conductor. Joining expedtadam and darparniox were the other 3 Line Managers from Survival 3. These being

William278 for the East Line,

Mrs_Diss for the South Line and Skelleton123 for the West Line. 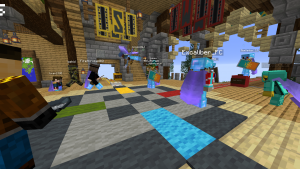 Players at Husky Grand Central before the ride to West Station.

Survival 4 launched on the 1st of April 2020. Just as in Survival 3, Grand Central Station was integrated into the pre-built Spawn area, allowing for easy expansion of the SRN. However, the first week of Survival 4 was plagued by lag and plugin issues, caused mostly by the sheer number of players that were online, averaging about 80 during peak hours. As a result, the [HeadMod]s announced the creation of a second survival world (Beagle) to run alongside the first (Husky). A second spawn area was constructed by the Build Team including a second Grand Central Station for the Beagle world. With the addition of 4 extra main lines, the SRN Team was understaffed. As a result, darparniox, alongside two former line managers in

Aeghu agreed to help mobilise the network on Beagle. The SRN on Beagle would use a slightly different system to the SRN on Husky. It would use the help of ‘eager’ members of the community who were assigned stations to build by the Beagle Line Managers.

The first station opened on the 9th of April; North Station on Husky built by expedtadam. Mrs_Diss would open Husky South Station near the end of the month on the 27th of April. On the 17th of April, long time East Line manager William278 announced he was stepping down from his position, stating he no longer felt he could commit the time he would like to the role. 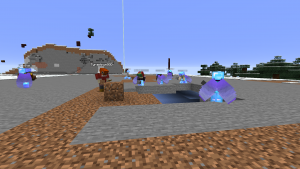 Players help create a canvas for the network maps.

June would see the second stations on both the Husky North and South lines completed by their respective line managers. This month would also see the return of

misterblue28’s network map art. Over a period of just a few hours, space for 2x2 maps on both Husky and Beagle would be cleared out.

The 1st of July would see West Station on Beagle open, which was built by

legowar1508. At the end of July, the third station on the Husky North Line, Makna would also open. Alongside Makna, the first branch line opened. This line started in Makna and headed Southeast, connecting the new City of Seven, to

ThatRoger’s base before terminating at Egg Harbour, the Husky base of expedtadam and 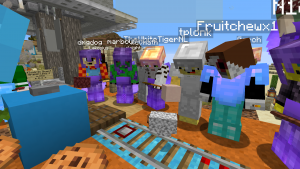 August would see expedtadam fully assume the role of conductor alongside his existing role as North Line manager for Husky. darparniox would continue to serve as a line manager for the Beagle world alongside marbou9, with Aeghu since stepping down due to inactivity on the server. Forest Hall Station would also open this month. September would see 3 more Beagle stations open in a triple opening, a first for the SRN. This opening would see North, South and Alina Stations officially completed.

On the 19th of October, the long-awaited HQ Station would open, the second station on the Husky West Line. Serving as the second west line station, the building would also hold the main storage area for the SRN and would continue to be developed over the next few months to include farms, RHN connections, and offices for line managers. In addition to this, Dry Banks Station would open on the 24th, the fourth station for the Husky North Line.

Over the next few months, progress across the board for the SRN slowed, with just a single station opening in the space of three months, that being Seaside Station, opening a few days before Christmas in December 2020. It was during this time that Mrs_Diss stepped down from her position as Husky South Line manager. At the start of the new year, marbou9 would also officially step down as a line manager, leaving expedtadam, Skelleton123 and darparniox as the only remaining line managers to carry the project into 2021. 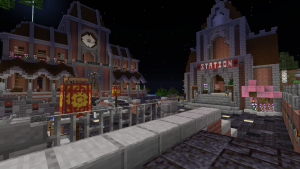 Branch Line stations started being built on Husky, like the one at Takeshi.

Despite the lack of momentum with main lines, branch lines saw a major increase in this period, with the north-western portion of Husky seeing branch lines that linked up Prosperity, Takeshi, M-Bay, Sandstone Sights, Gates, and Witchead to the main lines.

The SRN would see more momentum in the month of February, which would see another three stations added to the network: Chaincastle and Canopy Stations for Beagle; and Nimwald Station, the third for Husky’s West Line. The following month of April would see Mountain Station open, the third on Beagle’s West Line. Its builder,

Slomo_1994, would eventually go on to become the Line Manager for the Beagle West Line in early May 2021 but would transfer to the Husky East Line at the end of the month. 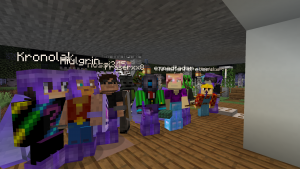 Montenator, would take up the mantle of Beagle South Line manager after the opening. At the very end of the month, Skelleton123 would open the fourth station on the Husky West Line, Oak Town Station.

June and July would see more steady progress for the SRN, with Montenator opening Nova Station in June at the base of

Nonium. July would see Slomo_1994 open Marble Heights Station as well as the Sethrum Branch Line station. This month would also see construction begin on the Husky Southwest branch lines, connecting various points of intertest in the south west of Husky to the main lines. The Stump > Arklantis > Lotus branch line would also continue to be worked on, spearheaded by

August would see the Beagle network continue to expand, with Montenator opening Machair Station on the South Line and darparniox opening Crystal Cave Station on the West Line, another build by legowar1508. The following month, Husky would again see several stations opening, with Slomo_1994 opening Hub Station on the East Line and expedtadam opening Ohm Shores and Toadstool on the North Line, officially making it the longest North Line in SRN history. In October the long awaited opening of Stump Station happened, the opening of the station would mark the longest construction time of any main line station in the networks history, lasting roughly 15 months. Alongside Stump Station opening, the Lotus/Arklantis Branch Line also opened, connecting up the base of

Arkhangellsk and the City of Lotus to the SRN. Cordelia Station, the sixth station on the Beagle South Line would open in November, built by Montenator and

To kick off a brand new year, the Husky SW Branch Line would officially be opened. Its opening saw 8 new stations open, connecting various POI's such as

_Shako's town of Vitruvius and Blues Beach and other small towns and bases like Butterfly Valley, Sikukuu, The Haven, and the base of

HeavyDork at Spiral Station. Two junction stations were also built in the network, Ice Cap by Montenator and Oxbow by

eybwam. Future plans included bringing the line down further south from Blues Beach to connect up to Lotus via the town of PinksVille.

eybwam would also assume the role of line manager at the start of 2022 after his impressive work in building Oxbow Station.

Scooberson announced that Survival 4 would soon be coming to an end, this meant that construction on any new SRN stations would halt, instead efforts were put into finishing the remaining stations that were under construction, as well as starting to plan for Survival 5. Slomo_1994 completed Meridian Station with the help of

Ze_Tais during this time, officially making the Husky East Line the longest east line in the networks history, at 6 stations long. Montenator would also work on finishing two more stations on the Beagle South Line with the help of N1cM4tth3w63, officially making it the longest main line ever at 8 stations long. Meridian Station alongside Rivermill and Petal Ranch Station would officially open on the 6th of February 2022 and would be the last major activity of the SRN on Survival 4. This opening would also see Nonium and

_Brin open a branch line connecting their two bases. Starting at Nova Station at Nonium's base, before heading towards B-42, _Brin's base. The branch line also had another small station between the two bases, named Baba Yaga Station.

In the final months of Survival 4, a few more branch lines were also built. This included another branch line from Seaside Station connecting to Sea Marsh Station built by

CanadianSteampk. The line then looped back southwards to reach the small town of Orion, which was also a large hub for the RHN. After talking to its owner

FuZion_Panda1, Montenator built a small station to serve the town. Developments were also made on Beagle, with

mrkalaspuff building a station at his base while TrueWinter extended their branch line to reach Winter Airport.

Splittingadams would also start another branch line on Husky, attempting to reach a new station from Witchead.

Below are two links to Imgur albums showcasing all the stations built on Survival 4, including many that were never finished or connected.