Erebus (prounounced air-eh-vaws) was a vibrant city located in the End Dimension on the Dogcraft Server, Survival 3. The city was founded by

dmgdog who was quick to ask friend,

TrainerMoon, to assist in the planning and running of the city. Erebus opened its doors to the public during Erebus Opening Day on the 23rd February 2020. The event lasted 8 hours that included many minigames such as spleef, mini golf, elytra races, and Who Wants to be a Millionaire?! hosted by Events Team Leader

dmgdog had been thinking about for a while. However initially, dmgdog planned the city to be a solo project. On the 10th December 2019 dmgdog found an island on which he thought would be perfect to situate Erebus in. After posting a screenshot of the map on the Cyberdog Nation Discord Server, other players were intrigued about the idea of having a city in the end dimension, since it hadn’t been done before on Dogcraft.

A few days after dmgdog started work on the island, he realized that the project would be too large to complete alone, so he set up a Discord Server to be able to communicate with other players about the project.

TrainerMoon was appointed as a second mayor to help organize and watch-over the project, and to assure the city ran as smoothly as possible. After an announcement was made, looking for people to join the build team, three eager players,

expedtadam all said that they were interested in helping prepare the city for the opening. On the 24th December 2019,

TheWhiteTigerNL was appointed as the fourth builder of Erebus. On Saturday, 22nd February 2020, one day before opening day,

Txp_ was promoted to Mayor after their commitment to the development of the city. 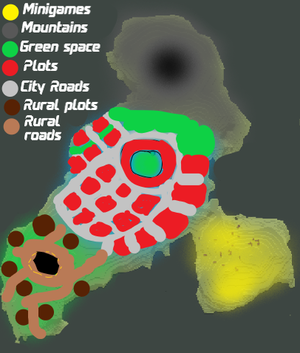 The initial city plan for Erebus

After the build team was assembled, everyone was excited to get started. However, dmgdog struggled to clearly present his initial plans and ideas about the city to the other builders which led to a small amount of confusion and curiosity. It was decided that the city would be split up into 3 main sections; The Main City, the Rural Area, and the Mountainous region. 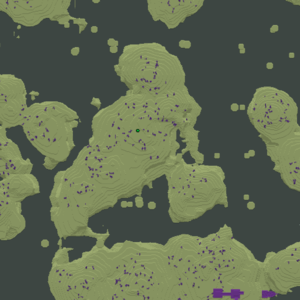 A mini-game area was also added to a connecting island, where games will be built for the opening day in 2020.

Work began on the server as dmgdog, Kingcreeper1, Txp_, and helper

nossi345 flattened the terrain in preparation for building the city.

This was followed by creative building, where the team built a mock landscape and started to design the town hall. 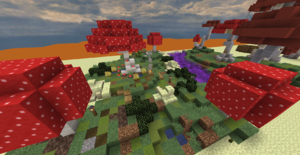 A mock landscape made for Erebus

After two months of development in Erebus, dmgdog finally decided on a conclusive plan for the layout of the city. Erebus would be divided over three end islands.

The main island, called The City Of Erebus, was where all the player plots were. Located here were the Town Hall and other important buildings. To the South lay Mushroom Meadows; a more rural landscape covered by magical mushrooms. The swampy marshlands filled with purple gunk fills the centre of this space using glass layers to produce this effect. 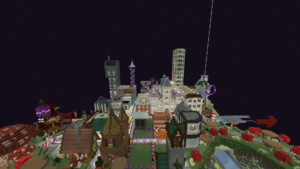 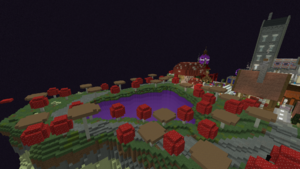 The North part of the main island was reserved for additional plots in anticipation they were to all be claimed on opening day, and this was the case. The Erebus Build Team worked hard after opening day to roll out these plots as soon as possible. This area was a more residential side of town, including the unfinished Council building and Plot contest winner 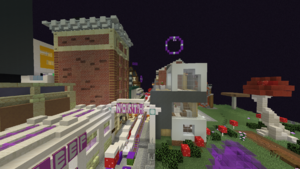 To the South-West of the main island was the minigame area. This area was designed specifically for opening day. It hosted games such as mini-golf, parkour, an elytra course, and an iceboat track. 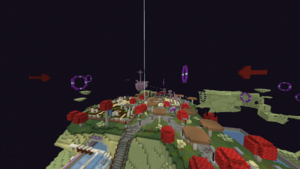 278 Studios was the island to the West of the main island, an idea from

William278. Here was the location of one of the many exciting events that were played on Opening Day, hosting Who Wants to be a Millionaire. 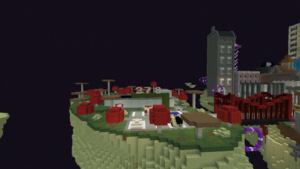 After many unsuccessful attempts at designing the town hall himself,

dmgdog asked the build team to help him.

expedtadam combined elements of both their designs to create a stately, but practical building. The hall's palette consisted of endstone bricks, smooth quartz variants for the walls, and purpur for the roofs. The interior was a cozy and modern design, with the use of vegetation to add colour to the build.

On the ground floor, there were two signs located at the rear of the building that displayed important information about the city. In addition, there was also a gift shop, a set of toilets, and the map of the city.

The first floor consisted of 5 office spaces — free for Erebus Builders to design — with a café and common room area.

TrainerMoon's offices were located in the central tower on the second and third floor respectively.

The basement was for access of the build team only. However, there was viewing access from the ground floor in the form of a glass window. The basement had a storage area for city projects and a super smelter.

On the 2nd January 2020, Erebus created their own YouTube channel.

Under the command of

Txp_, this channel would be used by the city to give the players an idea of what Erebus was all about. After the premiere of the city trailer, and the announcement of the opening day, videos where rapidly produced such as the ‘’Erebus quick start guide’’ or ‘’the grand opening recap’’.

At the time of writing, the channel has been transformed into Alina’s official YouTube channel.

On January the 6th, Erebus started their own radio station called (E.R.S). It was founded by

expedtadam. On the 6th of January was when they had their first music call which lasted a shocking 9 hours. A radio station was built in the city by Txp_. 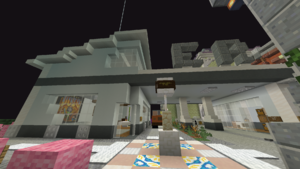