One of the five original worlds on the Dogcraft server, MCMMO was a vanilla world with the additional of an 'MCMMO' plugin. This plugin brought common features of the massive multiplayer online (MMO) gaming genre such as leveling and skill trees, and brought them to Minecraft (MC).

MCMMO saw more use than many of the other original worlds (Amplified, Creative and Skyblock), although all four were overshadowed by Survival.

The Spawn area of MCMMO was much further developed than other lesser-used worlds. The spawnpoint was at the top of a large ice sculpture, leading down to an area with many medieval structures at varying heights. Some smaller shops were present, as were public vegetables farms and gear for new players. A sheep known fondly as Peter wandered the area, dying many times and being resurrected by higher staff each time.

LAK3RS. The base was within walking distance of Spawn, and was firstly started as a base where moderators would build, before being left to the singular player.

The base was surrounded by nether brick walls, and the land area inside had been converted to netherrack. A large central tower encased the predominantly underground base. The base was set out into floors, each accessible by travelling down staircases around the large hole in the center. Rooms included a large dining hall, each seat taking the name of prominent server members of the early 2016 period, torture chamber, as well as large storage and farm rooms.

Dining hall table of LAK3RS' base 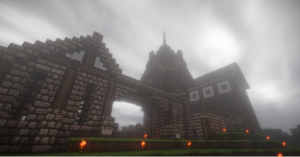 An area of 2lesslives' base

2esslives built a rustic clocktower as the centerpiece for his base, one of the larger examples on the world.

Other notable players of the world included

Ult1mateParad0x, and, although little is known about their achievements there.