Survival 5 is the fifth era of Survival Multiplayer worlds on the Dogcraft Server. It succeeds the Survival 4 world, bringing with it the update to Minecraft 1.18: Caves & Cliffs: Part II, and a total reset of Dogcraft Dollar balances, and claim blocks.

Scooberson that the Dogcraft Server would be updating and that after that Survival 4 would soon be ending to make way for a Survival 5. Some details about the new world were revealed, such as the continuation of two worlds, a total reset of claim blocks (which would be re-earned), purchases and DCD balances, a mall world reset. It was also announced that Survival 5 would update to Minecraft 1.18.1 and later would update to 1.18.2.

A further announcement on the 1st of March revealed further details. The Survival 4 worlds will be taken down on the 14th of March and that Survival 5 would be launched on the 18th of March. The amount of worlds will be increased to four, and will be named Corgi, Labrador, Shepherd and Akita after the results of a community poll. It was also announced that the server's economy systems (currency, homes, mall) were undergoing a major reconstruction at Rendog's request, and that they would not be ready or present for the beginning of the Survival 5 worlds.

Survival 5 launched without the presence of Dogcraft mainstays such as Dogcraft Dollars (DCD) and multiple homes system. Homes could be set by sleeping in a bed and using /home to return via teleport, one per each of the four worlds, a significant departure from the default setting of Survival 4 or earlier 'diamond home' item which provided infinite homes. As per previous worlds which launched without a Mall, a player-run alternative was set-up and become popular quickly. This player-run mall, MOTTO, used diamonds as a form of currency in the absence of DCD.

Three months after the launch of Survival 5, in June 2022, the economy was rebooted. Dogcraft Dollars made a return, but were distributed using a new, more linear formula which is tied to ReNDoG's patreon pledge in order to lower their supply and therefore increase their value: Hourly boost × (your time played in that hour / the total time played on the world for that hour).

Homes were once again available in theoretically infinite amounts, but now at an exponentially increasing cost in DCD for each new one set, so that escaping the vanilla survival movements constraints were a reward for accumulating DCD rather than a baseline feature: Private home cost = 25 * 2^(home count). 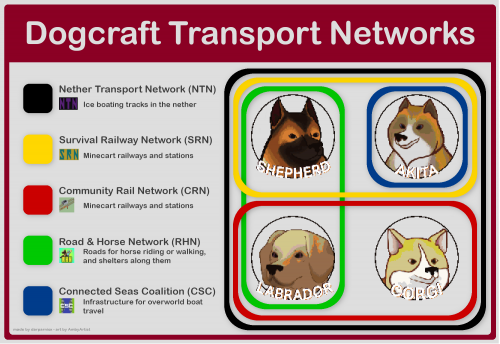 Player-run transport networks are once again a major part of the Survival 5 landscape.

In addition to entrenched networks, such as the Survival Railway Network and Nether Transport Network, the Road and Horse Network and .Path Network Group return and new networks such as the Community Rail Network and Connected Seas Coalition have appeared.