Hydropolis was a city on the Survival 2 world, built in the middle of an ocean on a guardian temple, further developing a futuristic/sci-fi style.

Hydropolis was started as a small farm project between the players RY44, _gewoon_iemand_ and slightly later DragonFire441. All based around a guardian temple, an array of farms were built down below the ground. Meanwhile, above water, decoration of the farm had started, producing a prismarine temple, reminiscent of Classical architecture. Then soon a quad of iron farms were hung in the air around the top of the monument, which were connected by a ring, introducing glass and quartz to the palette, which were instrumental for the development of the theme into a futuristic style.

At this point, the ideas of the founders came together to offer the absurd idea of creating a city in the water surrounding the city, inspired by Havana and Akkara: however ideas were only starting to brew.

At this point, player LAK3RS was invited to help come up with designs for the city, from whom the idea for the pedestals came (see later), as well as advice from someone who at the time already owned a city. In addition, Kevinstop was chosen to act as a fourth mayor, though he later became inactive and left his position. 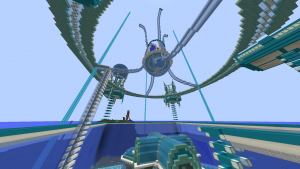 The city was based on several ideas and styles: the centre of the city was mostly based on the futuristic-greek style, which became Hydropolis' feature style down the line. The rest of the city was based on the 8 planets in the solar system, despite original plans for having Pluto as well. The 'donut' island, and 8 pedestals were divided up into 8 districts, each themed after the relating planet. The farm area beneath the monument, also known as the hub, was a mix of many styles, each of which related to the farm which was there. The design of the centrepiece to the town was also inspired by ImpulseSV and TangoTek's Bases on Hermitcraft season 5.

The idea behind the name of the city is relatively straightforward: after having gone through several ideas, the mayors decided on naming the city the "city of Hydros", which was then changed to "Hydropolis", lit. city of water.

The layout of the city, as seen in the rough plan on the right, was quite unlike the other cities, in that it was much more spaced out. The centre of the town in the middle, consisting of 4 smaller towers holding spheres on the corners, with a central tower in the middle, almost reaching build height. 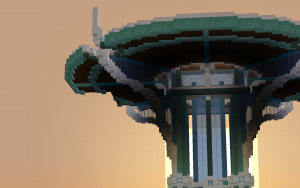 Picture of the top of one of the pedestals from below

Around the centre is the "donut" island, divided into 8 slices: each of these slices was terraformed in the fashion of the 8 planets, with the gas planets made using mostly glass and the fog effect. The donut held many different types of building: in each sector there was an office for each of the district managers: other buildings included embassies from Havana, Mollus' area, the MicroMesa, and a couple residential builds which were built in the week for which the city was open.

Around the donut island were positioned 8 residential discs suspended above the sea, each of which had space for 8 plots; each of these raised areas were attributed to one of the districts.

Other than the main city, there were several POIs around the island worth of notice:

At the south end of the city was positioned the "builder's storage" building, which housed, as suggested byt he name, a storage area for the Hydropolis team. Beneath the storage area was also a large wool farm, which several people complained about being frame-affecting. 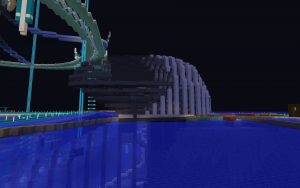 Building known as the "plague mask"

The Uranus District housed the building nick-named the "plague mask", which functioned as an entrance to the lower part of the central hub, the creeper farm and the Hydropolis Bar, as well as doubling to function as DragonFire441's office.

Beneath the Plague Mask was the Hydropolis bar: the significance of this location was that it housed RY44's head collection, which was one of the most complete collections on that world; this was one of the last builds to be created within the town.

In the centre of the city, beneath the ground, was located the "Hub". This was the location in which all the farms, around which the city had formed, were based. This area had an array of farms, such as a slime farm, the killing chamber for the guardian farm, crop farms, villager trading hall etc., many of which helped greatly with the creation of the city.

Two small events were organised by the Hydropolis team: The opening of the city, and a massive wither fight in memoriam of Survival 2.

On Sunday the 7th of October 2018, Hydropolis opened: This consisted of a ribbon being cut, and a tour of the city for those who came; however, sadly the other events had to be postponed, as the large amount of people online on the day made events such as a wither/ender dragon fight impractical.

This opening was very short-lived, as the server reset for 1.13 on the 19th of October, meaning that Hydropolis was open for a mere 12 days. 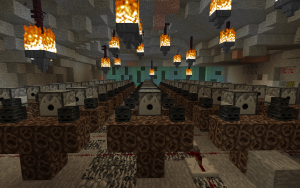 With the heads left over from the planned events for the opening, and with the server coming to a close, a large,

65 wither fight was carried out with help from the community in honour of the loss of Survival 1 & 2, as well as the loss of the towns. This is among the most wither fought simultaneously on Survival 2. This impromptu event happened on the 18th of October. 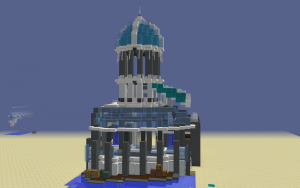 Design for the Havana Embassy

Hydropolis built 2 embassies in other cities: one was built in Akkara, trying to emulate Hydropolis' style with a palette more suitable for Akkara; and one was built in Havana on the last day before the reset, just in time to be featured in some of the downloads of that city.

Hydropolis, a city suspended above the ocean by diverse floating rings. The city merges futuristic with ancient Greek, all built upon a guardian temple. - domi_adam's Tour Guide

Closure of Survival 2 and Legacy

With the reset of the server in the upgrade to Minecraft 1.13: The Update Aquatic having happened, the team re-organised to become the H2O team, originally named Hydropolis 2.0: this consisted of the mayors of Hydropolis, as well as Arkhangellsk, Cookies58_ and nossi345, who went on to for the founders of Chronia on Survival 3, with some others such as Jamesisnotaduck and Thralc also remaining as part of the team.