Nitro UHC, or Nitro Ultra-Hardcore is a minigame on the Dogcraft.net server based on the widely popular Ultra-Hardcore game mode in which players must fight in a battle royale to be the last man standing, while natural regeneration is disabled. Nitro changes the UHC formula by increasing the game speed significantly, specifically by making animals and monsters drop minerals and materials one would usually gather underground.

Nitro UHC games last twenty minutes, after which all remaining players are teleported into a death-match style final arena. Before then, players have a chance to gather materials, primarily by slaying monsters and fighting other players. PvP is enabled after five minutes and monsters begin spawning after five and a half minutes, meaning players are encouraged to be quick in gathering gear, else be overwhelmed by other players and monsters.

Information about the game you are currently playing is displayed on the right hand side of your screen, including your current position, kills and the game timer. There are currently two servers available for players to join, which can be accessed from a lobby. To join, type /servers and select Nitro UHC from the hub. This will place you into the Nitro UHC Lobby. From there, you can type /servers again to be able to select either Nitro UHC server 1 or 2.

Nitro UHC was originally a regular Ultra Hardcore gamemode available on the Dogcraft server, however ReNDoG suggested adjusting the game to make it faster and more exciting and the Nitro variant of UHC was subsequently born. For a while, Nitro UHC was one of only two servers on Dogcraft that were hosted on a separate server on the network, the other being Bedwars. Unlike Bedwars, however, Nitro UHC proved to be incredibly popular and became the game of choice for ReNDoG when he pays a visit to the server, usually on stream.

In the transition from the Survival 2 world to the Survival 3 world and the update to Minecraft 1.13: The Update Aquatic, Nitro UHC was removed as an available gamemode. However, a new version of the popular mode was developed for the new version of Minecraft. The new update adjusted game balancing, added new final arenas and Phantom mobs that dropped elytra. The new update also introduced a UHC lobby, where players can join two UHC servers allowing for two games to run simultaneously. After much testing on secondary servers and through various livestreams, the new version debuted officially in a livestream by ReNDoG on the 2nd of June, 2019 and has been met with positive reception. 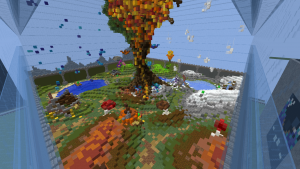 The Four Seasons final arena in Nitro UHC. Alive players are randomly scattered around it. Aside from lava, blocks cannot be placed or removed.

A number of Nitro UHC competitions have been held on Dogcraft, notably that of the Nitro Live series organised by the Events Team, in which players compete in various groups to ultimately determine a champion. Prizes for Nitro Live have ranged from cash money prizes to Dogcraft Dollars and commemorative banners and trophies. Additionally, players regularly hold mini-competitions in game, typically organised on the fly through in-game chat. Often players pool together a DCD prize that is awarded to the victor of the round.

The Dogcraft Build Team designed the final arenas for the Nitro UHC game.

Ancient Ruins by Sasha1nine7 and imadi99

The first collaborative map, designed to test players in both close quarters combat, and long range archery skills. The Ancient Ruins map is set around the ruins of an ancient temple, and the nearby watery landscape... Be careful not to fall in.

This arena by Wdrill was inspired by steampunk, as can be noted when flying above and seeing the giant cog. Many players have succumbed to falling to the lower levels and not finding their way up again. However, persistence is the key. There is a way up.

As part of the second roll out of maps, Jungle encompasses a different style of game play. From swinging in the trees, to underwater combat. Just be sure not to be standing atop one of the giant jungle trees when your opponents set it on fire.

This map was originally going to have a fully functioning mansion as well, but last minute this was decided against, to allow more open game play. The map includes an apple orchard, a vineyard, a campfire and a fountain. The fountain has been known to trap many people, leading to their untimely deaths.

This map originated as the home of the pirates. Seen here is the pirates cabins, treasure rooms, and even a skull cave. The lore of the build is that one day, whilst the pirates were out, a group of non-pirates came to raid their camp, midst raid the pirates returned via their ghostly portal. Side note, fire tick is on, if you are up the crows nest thinking you're safe - think again!

Centered around a giant tree, this arena is split into the 4 seasons, spring, autumn, winter and summer. Be sure to check out some of the houses, they create great cover whilst regenerating health.

Combining the 4 elements that are earth, wind, fire and water, this map allows more many hiding places, but in doing so, allows players to get trapped in the valleys below.

This exceptional masterpiece forces the players to be both cunning and use their parkour skills. Pressure plates light up lamps, alerting other players to where you are. Unfortunately, although this arena was beautiful some players complained that it didn't give very interesting matches and so it was discontinued from the map rotation. The map is available now for download via the planetminecraft service.

This table contains the loot table for Nitro UHC mobs, and what they will drop. These loot tables are subject to change. As of 1.16.5, there are currently several mobs missing from the loot table (these are not listed below).