"Are you ready for the first PVP event of Survival 4?"

May Mayhem was a player-organised PvP tournament style event held on the 24th of May, 2020. The event was structured as an elimination tournament, in which players partook in a series of one versus one PvP games. Challengers were provided with a standard kit of equipment which they had to use in battle and were restricted from using any other items. May Mayhem was organised by

The event was well received when announced, garnering a good number of registrants. In all, 21 players signed up for the event, with 19 showing up on the day. Battles were efficiently held and the fast pace of the event helped keep players interested throughout. For the event, a special area was built containing six arenas as well as a special sky island arena for the final set and third place "bronze" match. All games aside from the finals, which were a best of three, were single knockout. 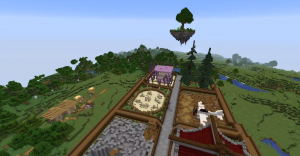 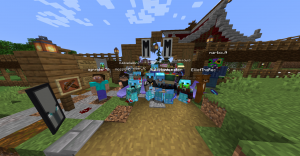 Players celebrating the end of the event