Takeshi was a settlement on the Husky world of Survival 4 and was named after the popular Japanese gameshow Takeshi's Castle. It was a public space focused on creating a cohesive cityscape, using a modern Asian style to give guidance in this pursuit. The city could be found around 1500 blocks North-northwest of Spawn, near North Station and Prosperity. It was connected to the Road and Horse Network (RHN) via Takeshi Road and the Survival Railway Network (SRN) via the loop line from North Station via Prosperity and continuing to M-Bay and West Station in Gaia.

Takeshi land was split into multiple areas. The Takeshi Canal ran through the center of the landscape and along it were the most memorable parts of the city. Visitors arrived via rail at Station Square which featured the Takeshi railway station and an RHN shelter opposite. A dock was also in place, to allow access to the canal and sewer system. The main bridge out of the square led to the Takeshi town hall.

The town hall was a large brick building with city information, and the main road ran through it, leading to a central plaza for the eastern side of the city. This eastern district was zoned for commercial-esque buildings and was therefore comprised of high-rise buildings. Across the Takeshi Canal to the north and east was the northern beaches area, a more relaxed area with smaller multi-story shops and apartment areas. Along the southern river was a harbour/industrial area. Further south across the road entrance bridge was a storage shed and a small set of farms, across the river from the main city area. 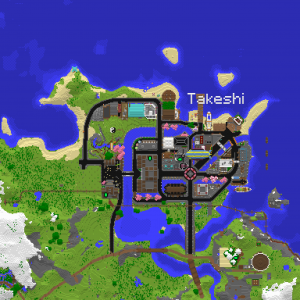 Takeshi was founded by a handful of ex-Havana councilors as a more casual endeavor than their previous collaborative work. Some brainstorming was made before Survival 4 launch and a preferred coastal area close to spawn was successfully scouted an hour or so after Survival 4's opening on April 1st 2020.

Construction progress was gradual throughout the year, first by creating a starter area, and then moving that to the current storage space when construction of the Takeshi Canal began in mid April. Landscaping in some areas was completed by

SamanthaArgos throughout the same month, in preparation for the creation of the town hall (

_edo's construction of the Gaia-Takeshi Road (later renamed to simply Gaia Road) and subsequently, of Takeshi Road to Spawn led to the founding of the RHN. The ensuing months saw the construction of a smattering of urban builds, such as Cafe Fushi Nashi (

expedtadam) before a period of deep inactivity after September.

In 2021, progress resumed with the planning and building of Station Square on the eastern side of Takeshi Canal and the town hall in January, soon after followed by the completion of the railways from either end of the city in February, both by darparniox. Soon after, significant expansion to the city's canal network took place and the first high-rise buildings appeared, as well the first expansion into the northern beaches area by April such as 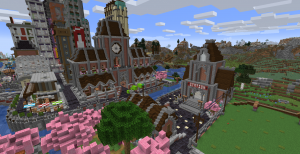 The Station area which kickstarted progress in the city

In June, activity in the city increased markedly and infrastructure expanded following the surprise return of Aeghu. Many high-rise buildings were planned and several created, including the distinctive The Continental (_edo), as well as Northold Holdings-Takeshi (

eybwam) and Crumb (darparniox) and renovations to the existing GFC Tower. Further expansion to the western area included Gaian and Alinaian embassies (

Dragonfire441 and expedtadam, respectively). By July the majority of the western area had been filled along the diagonal promenade. That month, the cyberpunk-esque TC Tower (_edo et. al.) became the tallest build in Takeshi and it largely completed the central city urban area of the city.

General building activity in Takeshi was steady from there on out. With the central area complete, attention turned to gradually fleshing out the coastline surrounding it. On the northern beaches, additions included a pier, forum amphitheatre, and the Eloquent building in the third quarter of 2021. The Drowned Seawall was built in October in order to prevent the increasing drowned population of the western sea from making landfall. It inspired activity in the area with more harbour elements, nFT building, and Harbour Office building following after in the run-up to the end of the year. Meanwhile, a series of builds by

eybwam had appeared along the northern beach residential area. 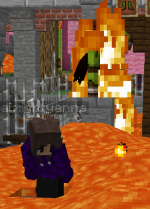 On the 5th of January, 2022, a panoramic image of Takeshi (by _edo) was added as a background to dogcraft.net and the Dogcraft Wiki after winning a category in the Wiki Screenshot Competition. Many neglected interiors were filled in and the Sailor's Hotel, Loan Shark, and Spark Garage were all completed in mid-January with a view to add more colour to the upcoming T-G Treasure Run. The Treasure Run, a collaborative event with the City of Gaia on the 22nd, saw competitors race to collect treasure and navigate between the cities. The event was won by eybwam, with

Minda905 in third. With the looming end of the Survival 4 era, attention turned to completing the Tranquility Park, in progress since 2020. Other additions during February included minor extensions to the sewer network and harbour area.

As a final act, the city hosted it’s Apocalypse Weekend mini-event, utilising the unique indifference to death at the end of a world as a catalyst. A game of The Floor is Lava was held on the 11th of March. The streets and beaches of Takeshi were drowned in lava and players were challenged to traverse from the station to the forum amphitheater without falling in using the existing features of buildings as parkour steps. After some minutes of finding any successful route, the best route was optimised through the evening. The record time was 56.72 seconds, by

Nonium route”. On the 12th, the next day, around 30 players gathered after the Survival 4 Send-off Event for a large-scale wither fight in the (now cobblestoned-over) city. The Takeshi claim was abandoned and over 70 withers destroyed much of the roads and created many holes in buildings, many players died multiple times, although some villagers miraculously survived the chaos.

Approximately in order of build date.