On the 2nd of September, 2017, the Survival 2 world was finally released for all players in a livestream with ReNDoG.[1] Just over a year later, on the 20th of October, 2018, the world would be succeeded with Survival 3.

The announcement of a new world came on June 1ˢᵗ from then Headmod Rustbite, via the dogcraft forums. In addition, it was confirmed that both worlds would remain on the server to play on, though the Survival 2 world would become the main world for the server. A ReNDoG livestream would be done to open the world on the 2nd of September later that same year.

The End Portal in the Survival 2 world, where ReNDoG lit the portal to enter the nether.

The Survival 2 world was launched via a livestream with ReNDoG, in the form of a role-playing quest where viewers along with ReNDoG had to battle the 'dwarves' (played by server moderators and members of the build team), leading up to a grand battle with the Ender Dragon.

The story was told via written books, which were handed out before the final battle. Due to an erroneous teleport, all players were killed and inventories were wiped. The only known surviving books, player amour and weapons, and moderator weapons are in Scooberson's spawn opening museum.

Throughout the development of the Survival 2 world, many builds and locations were created[2].

Spawn was the center point of the Survival 2 world, where the World Border was centered around and where new players joined. Spawn had a number of plots for players to purchase and live in and featured a number of key builds involved in the launch of the Survival 2 World. Spawn was built in Creative Mode prior to the release of the world. 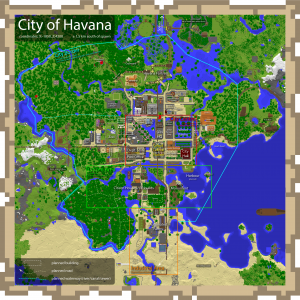 The City of Havana, based loosely on the Cuban city with the same name, was founded on the same day the new Survival 2 world opened.[3] Originally founded by SRN Spawn Station build team, _edo, Brianetta and darparniox in response to lack of functionality of Spawn, the city's scope quickly expanded to become the travel hub and culture center of the world.[4] It could be accessed by travelling south of Spawn Station and was the largest settlement on the server. 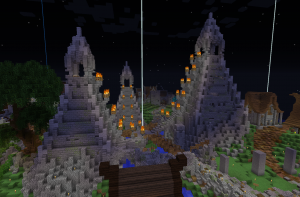 Akkara's Temples of the Gods, the centerpiece of the city.

Akkara City was a city based on a mix between Aztec and Colonial architecture[6] and was founded on the launch of the Survival 2 world simultaneously with Havana, however, the city did not open to the public until months later. The project was originally started by William278, mayor of Lackria on the original Survival world, and LAK3RS, who holds the Pioneer rank and was an accomplished builder on the server before the launch of the new world. A decision was made during the opening of the world to open the city in the coordinate center of the world at (0, 0), and an island was built at the location with a connective bridge to commemorate this.

On the 28th of April 2018, Akkara City opened with an organized event and a livestreamed base tour opening with ReNDoG.[7] It was considered to be the second largest settlement on the server, after the City of Havana.

On the 30th of June, 2018, Akkara was toured again by ReNDoG in an update tour, though this was never released.

A number of areas were publicly available to teleport to with commands: 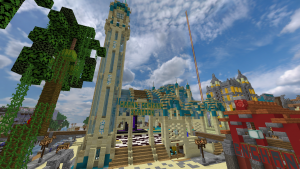 A view of Grand Central Station in Havana.

The Survival 2 Railway Network (SRN) was a community-operated overworld public transport service that consisted of a number of minecart railway lines across the Survival 2 world. It could be accessed from a number of major builds and settlements through the Survival 2 world, such as Spawn. It was centered in the City of Havana. The SRN also linked smaller builds via Secondary Lines and networks from stations.

The Nether Transport Network (NTN) on Survival 2 was the nether-based counterpart to the Survival 2 Railway Network, which was based on hyper-speed transportation using the mechanic of boats placed on packed ice to get around quickly. Just like the SRN, the NTN could be accessed from a variety of locations across the server.

On the 14th of October, 2018, it was announced that the Survival 2 world, along with all other existing worlds would be deleted and replaced with the Survival 3 world the following week. On the night of Friday the 19ththe world was removed and on the morning of the 20th replaced by the new world along with the update to 1.13: The Update Aquatic.