The Dogcraft Hunger Games was an event on the Dogcraft Server that took place on the 23rd of August 2020 at 6pm UTC. The Hunger Games were modeled after the popular mulitplayer minigame featured on many servers, Minecraft Survival Games. The event had a large, built-from-scratch map for all the players to explore, find chests, and fight in.

The map and event were organized and built by

N1cM4tth3w63, in association with the Events Team. 32 players participated in the event and a considerable number of other people streamed or recorded it, including coverage by the Cyberdog News Network.

In the games, 32 players fought to the death, using only the materials and items they were able to find in chests that were scattered around the map. The Hunger Games were hosted inside a massive arena built by the organisers.

A point-based system was used to score the games and determine the winner after three rounds of play. Each participant got 1 point per every 5 placements they survived, with additional points for getting third, second, or first in the round. Each player was also awarded 1 point for every player they killed. This made the event a little more balanced toward non-PvP-ers as you could hide out the whole round, but not get any kills, or you could play aggressively but risk dying in fights early on. After 20 minutes, or when the players were all hiding and no fights were happening, the remaining players were brought to the nearby deathmatch arena to fight it out in a smaller setting, with nowhere to hide! 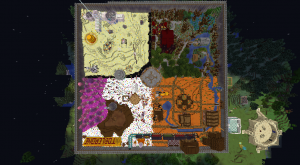 A birds-eye view of the entire arena

The Dogcraft Hunger Games featured a big map that was divided into 5 different sections: Moon, Graveyard, Western, Candyland, and the center cornucopia area where all of the players started. Each section, bar the cornucopia, had loads of different Points of Interest that ranged from a giant Hell chapel (Graveyard), to a train station (Western), to the planet Saturn (Moon), or to even a huge Toblerone chocolate bar (Candyland)!

Each section had lots of different unmentioned spots with chests or places to hide. Each section featured their own theme of underground caves, ranging from cookie caves (Candyland), to a gold mine (Western)! These underground areas winded through every section and were all connected. It can be a great spot to hide and be secluded, but it's easy to get cornered in the caves.

There were some notable highlights from the event: