DC Courtrooms are builds on the Survival 3 and Survival 4 worlds of the Dogcraft Server, as well as a Discord server. It hosted mock trials in the case of playful disputes. Serious cases of dispute do not belong in this courtroom, but should have been presented to a Staff Member. Cases could take place there or in the Discord.

The DC Courtroom discord was first created by

Domino_1 serving as Bailiff & Clerk, and

Dutchsoccer as judge. It was created because of the Anti Bean dispute between

William278 on the Pro Bean side,

darparniox on the Anti Bean side, and several other people spread across the two sides. After this dispute was resolved, the selection of judges and bailiffs was put to a democratic vote. Elected judges were marbou9, Dutchsoccer and

Broga_. Elected as Bailiff & Clerk were William278 and Domino_1, of which the latter passed this role to

SummerFlower1234 when he became Plaintiff himself. Jurors, Plaintiffs and Defendants could change from case to case. 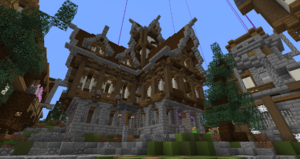 Chronia Town Hall, under which the Courtroom is located

Domino_1. Not all cases took place there due to some people not being able to log onto the server during the cases.

In Survival 4, courtrooms were constructed in both Gaia and Alina. Court cases took place in whichever courtroom seemed best fitting in the context.

The Bean Wars were a long running dispute, with the main players being William278 on the Pro Bean side, and marbou9 and darparniox on the Anti Bean side. Many others were involved on the side too, as pranks back and forth affected others. The conflict started due to William278 overusing the phrase "Cool Beans", to the annoyance of others. Marbou9 and darparniox responded to this by constructing Anti Bean HQ in Ouranos. The pranks escalated from there, involving 3 map arts back and forth, several pranks on the Anti Bean HQ and Ouranos and eventually even pranks that weren't related to beans anymore. This conflict spread to some of the playerrun Dogcraft discords, which prompted the creation of the DC Courtroom discord. The case did not have a very clear cut conclusion, as the conflict continued after the case, but judge Broga_ did rule that William278 should not overuse the phrase.

The second "trial" of the DC Courtroom wasn't as much a trial as it was an investigation, as there was no Defendant or Plaintiff. Members of the Courtroom looked into the strange appearance of

Renthedog, which was the second account to hold the Endergod rank. After some slight digging, it turned out that

Ironboundred was behind the account, who is the only person on Dogcraft who is allowed to have an alt for testing purposes.

Still from a clip of the second Chase.

The case surrounding the Chase mainly refers to the second iteration of The Chase, a game show event held in Ouranos by William278. During the first iteration (which was during the Bean Wars), William278 had prepared a trap that killed the Chaser, marbou9, with an anvil. During the second iteration, marbou9 plotted revenge. He rigged the ceiling of the Chase studio with 6 anvil traps, designed to kill host William278, the four contestants of the show, and cameraman

nossi345, all with the flick of one lever. The trap was activated successfully, prompting the court case looking into these events. After a long discussion, all charges were dropped, "because it was funny".

This case followed almost directly after the Chase Case, in which William had used a screenshot of a Discord conversation while using Discord's Light Mode. The Plaintiffs in this case stated that William's use of Light Mode had a blinding effect on Dark Mode users. The case did not have a clear ending, but it was generally agreed upon that William could do what he wanted.

The next case presented months later in October, and was the first case to get an official summary and sentence, copied below:

- DA makes an argument for the plaintiffs. Victim _edo testifies.

- Detective Mrs_Diss testifies with evidence of the defendant having placed the anvils that killed the plaintiffs.

- New charges of double attempted murder on Bailiff Summer and Judge Marbou, by William278 during trial.

- Closing arguments by DA ("nothing to add") and Lawyer ("I give up, please give minimal sentence").

- For 3x Murder: 5,000 DCD, refunded loss of items and well-meant apology to each victim.

- For 2x Attempted Murder: 1,000 DCD and well-meant apology to each victim.

- For Bribery: Death by anvil. Sentence successfully executed by Marbou9.

The Legowar Murder case took place in October 2019, and was once again closed with a summary and sentence:

Lawyer for defendant: (none; self represented)

- Plantiff's lawyer testifies an argument for the plaintiffs, citing a lack of safety and a violation of DC constitution part 20 - claiming the arena is a death trap.

- Defendant testifies that no codes were broken and that he is not responsible for other players' mistakes. He closes that philosophically nobody can be responsible for another's actions in real life, so it shall not be so in Minecraft.

- Plantiff's lawyer argues that "this is Minecraft, lol"; philosophical reasoning grounded in life does not apply. 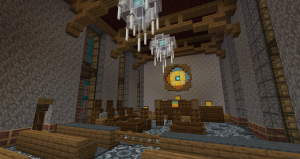 Interior of the courtroom in Gaia

This trial took place on the 18th August 2020, marking the first court case of Survival 4. It took place in the Gaia Courtroom.

- Googly started that dmg attempted to murder him by anvil, then followed to murder him via bow and arrow, in the grounds of Gaia, and thus ought to be protected by Gaian law. On these grounds, he sued dmgdog for his kidneys, firstborn, soul(already belonging to Broga), and his lawyer’s fees.

- Dmg stated that he had no malicious intent in placing the anvils, and killed googly in self defence. He countersued googly for grievous bodily harm and defamation, claiming that he had dropped anvils on him

- Googly brought the evidence of dmg’s placement of 16 anvils in Gaia’s storage room, and a screenshot of his death by bow and arrow from dmg. He claimed that dmg was trying to kill him since he had just announced that he was going AFK in chat.

- Dmg claimed that the anvil placement was all in good faith, and were not placed with the intention to kill anyone. Then he brought evidence that googly placed 3 anvils, claiming that these were a real threat to his life, thus justifying his self-defence in the form of killing googly by bow. Trainer also called Txp as a witness, who was asked whether he was having a good day, which was confirmed. Finally dmg claimed that googly had taunted him by going AFK, justifying the initial agression. Closing statements:

- Googly reiterated his points about being a Gaia citizen unjustly attacked by dmg with a barrage of anvils, and later chased down to his death, referencing the fact that he had placed 13 fewer anvils than dmg, not justifying the ‘self defence’.

- Trainer reiterated the fact that the anvil placement was not malicious, and that their client was justified due to being taunted, and then attacked with potentially lethal anvils, stating that googly was to blame for the damages to both himself and dmg.

The charge of attempted murder of

TrainerMoon was given a straightforward summation by Judge '

- Case closed, Collie failed to save herself... had to dismiss 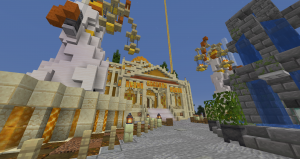 The courtroom placed in the East of Alina

A case of property rights between

dmgdog was held on the same day as the previous case and was documented within a special CDNN video. Judge Broga_ gave a verdict as such:

- At end of the day, Blue has bought her rights back too her ownership calling rights. Dmg has agreed to no long claim blues house as his. with a settlement pay of 10k. This trial was rather tame.