"Cyberdogs: The Chase is on!"

The Chase is a game show event that has been held on the Dogcraft Server, based on the eponymous real-life game show of the same name. In the show, contestants face off against a "Chaser" who attempts to stop them from winning a cash prize. On Dogcraft, the show is hosted by William278 in a purpose-built studio located beneath the Ouranos Theatre building. The event features "chaser" that tries to stop contestants from winning Dogcraft Dollars. Thus far, the event has been held three times; twice in a purpose built studio underneath Ouranos on Survival 3 in 2019 with chaser

marbou9 and once in 2021, in the Gaia theatre with chaser 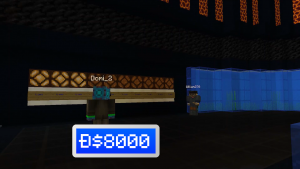 Domino_1 building cash in the cashbuilder.

The format of the show was very similar to that of the source material, with a few adjustments. The Chase features four contestants who have to earn money for their team, while a "Chaser" attempts to stop them. Each contestant first goes through two rounds; the Cashbuilder and the Chase. 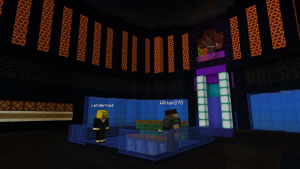 xandermuis answering questions in the second round.

In the cashbuilder, contestants earn 1000 DCD for each trivia question (based on Minecraft and Dogcraft trivia) they answer correctly in a minute, up to a maximum of 20,000 DCD. The most won by a contestant in the Cashbuilder is 12,000 DCD. 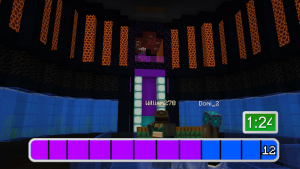 After the Cashbuilder, they take their earnings to the Chase in which the contestant must "escape" back to their team by answering more questions correctly, this time multiple choice. If they answer right, they move one step closer to home, starting with four steps from home. However, also answering the questions is the Chaser,

marbou9, who also moves closer to the player with each question he answers correctly, starting from the top of the board; three steps away from the player. If either the Chaser or the contestant answers a question incorrectly, they do not move. When the Chaser reaches the contestant (and thus answers more questions correctly than they do), the player is "caught" and is out of the game, with their winnings from the cashbuilder removed. However, if they manage to escape and return to their team, their winnings are added to a pool. Each of the four players repeat this process. Once this process is over, all remaining players move to the next round. In an event where all players are caught, one player is nominated by the team to move onto the next round and the team's winnings are reset to 4000 DCD, which is split between all contestants should the nominee win. 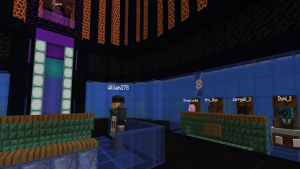 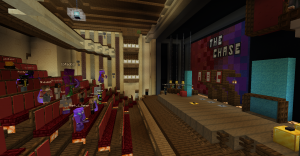 The first two shows was organised by William278 and misterblue28, mayors of Ouranos and held in a studio underground. The studio was arranged with a stage and auditorium behind it, with a control booth situated behind that allowed misterblue to operate the controls which adjust the lighting and Chase board. Both episodes were recorded with assistance from

nossi_. After recording, the videos were edited by William in Premiere Pro and uploaded to YouTube. The production process for each episode took approximately 50 hours, starting with the recording and ending with the final upload. This led to the second episode of the chase having an extremely long 194-day production span, with the recording taking place on Ouranos Day on the 13th of April and the final video being uploaded on the 24th of October 2019.

On April 25th, 2021, a third episode was produced, this time by members of the Gaia council and senate, with 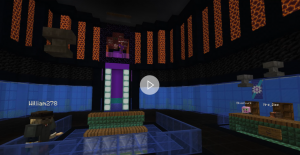 Anvils falling during the second episode of The Chase.

As an act of revenge for

marbou9's double anvil kill on himself and Domino_1 during the excavation of the Chase Studio,

William278 plotted with misterblue28 to kill marbou with an anvil during a question on the topic during the filming of the first episode of The Chase. The death, which can be seen in the first episode at the 25:40 mark followed the question
"Which of the following is NOT a valid Minecraft death message?". After the answer was revealed, anvils were triggered to release by misterblue through a piston mechanism nicknamed the "marbliterator" much to the horror of a visibly worried marbou9; his head darting left and right in confusion at the redstone sounds. The space cow was swiftly struck by two falling anvils and died thanks to the armour carefully selected to exclude a hat by William. Hilarity following the conclusion of filming ensued.

Marbou9 sought quick revenge after filming concluded and began preparations to return the favor the following episode. He carefully co-ordinated positions to release a series of anvils, this time killing not just William, but the entire set of contestants and cameraman

nossi_. The death, which can be viewed at the 39:52 mark on the second episode killed six players and led to the creation of the DC Courtroom discord and courthouse. These shenanigans led to a sharp rise in anvil crimes across the Dogcraft server and led to it becoming a sort of tradition across community members.