The Husky SW Branch Line was a large branch line in the South-West of the Husky world on Survival 4 of the Dogcraft Server. It featured 10 stations that served various bases and POI’s. The project was spearheaded by

Montenator seeing how well connected the south west was by means of road with the RHN. The idea was floated to have a large SRN branch line there too, in order to serve as a second method of transportation around the area.

Some talks about having branch lines towards places like Vitruvius and Sikukuu had been mentioned in early 2021 but had never come to much. The first plans of the network were made by

Shortly after, several stations would start to be built, with

R0bstar building Butterfly Valley Station. These would be built alongside The Haven Station which had already been completed over a year prior in May 2020 but had never been connected to the SRN.

Alongside these stations, two junction stations were also proposed. This made the Husky SW Branch Lines differ to previous large scale branch lines like Winter and Avalanche on Survival 3, forming a more grid like shape compared to the traditional linear branch lines. The junction stations were meant to cut journey times between other stations and provide players with options as to how to get to a place. Montenator would build the first junction station, Ice Cap Station, while

eybwam would be approached to build the second, that being Oxbow Station.

After the opening of Stump Station as well as the Lotus Branch Line in October 2021, talks started about linking up Lotus to the SW Branch Lines via PinksVille and Blues Beach. _Shako would subsequently lead the construction of the line from Vitruvius down to Blues Beach. Sikukuu Station would be the final station to be fully constructed, and work on the last lines between Sikukuu and The Haven as well as between HQ and Butterfly Valley would be finished by Montenator and R0bstar respectively.

The branch line would officially open on New Years Day 2022. There were several parts to the line which were still uncompleted, these being the Stone Exchange/ Rosaline Branch Line from Alpine, as well as the lines connecting The Haven and Sikukuu to West Station at Gaia.

Stations on the Line 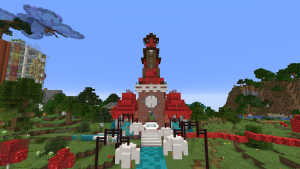 The station was designed and built by

R0bstar and was situated in his fantasy style base of the same name. The station had a main atrium where both line terminals were located. This room also had a map of the surrounding area as well as some utilities. A large staircase entrance took the player out into the mushroom forest portion of the base. A nether portal was located underneath the station.

Butterfly Valley Station had two connections, one to the West Line at HQ Station and the other towards Ice Cap Station. The lines around the station were built by

R0bstar and were specifically designed to blend into the base around them. 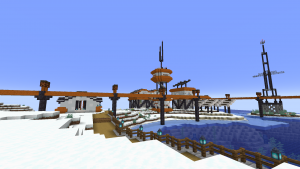 Ice Cap Station was designed and built by

Montenator in the style of a polar research base. It was initially planned to be used on the Beagle South Line but would be built on Husky instead. The station didn’t specifically serve a location but was instead one of the aforementioned ‘junction’ stations acting as a crossing point for several lines. As a result, the station had 3 terminals, going to Butterfly Valley, Sikukuu and Vitruvius respectively.

Montenator found the road running close to the station's location and linked it up to Ice Cap, building a shelter just outside the main building for horses. The station also had a solar panel array and a large aerial on a small islet nearby for purely aesthetic purposes. All the lines around the station were built by

Montenator in a similar palette to the station. 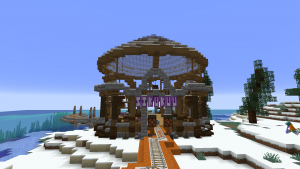 This station was built to serve the small winter village of Sikukuu which was built during the Christmas Stream Day on the 19th December 2020. Talk of a station at the village started in January 2021 but stalled when two of the village's mayors,

LazyNine, became less active on the server. Later on, the idea was revisited by the remaining mayor

N1cM4tth3w63 to build the station.

The station itself was circular in shape, with intricate patterns on its walls. A semi–closed dome decorated the roof of the station allowing lots of natural light (and snow) to fall into the central atrium of the station. The station had 3 terminals, one towards Ice Cap Station, another towards The Haven Station and a third, unfinished terminal to West Station at Gaia. 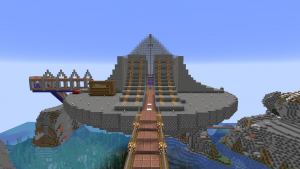 The Haven station marked the northernmost tip of the line, serving the small town of The Haven built by

TyrantrumGOD and various other players. The station would be the first ever branch line station to be built of the server, with player

XPModder completing the station in May 2020. A line was started with the aim of connecting to West Station at Gaia but this line would never be finished. The station would finally be connected to the SRN in January 2022 via the Village of Sikukuu instead. The Gaia line was never completed.

The station itself was mainly built with various stone types and was one of the few stations in SRN history to be floating. Its base was circular in shape, with walls stretching up towards a centre point, giving the station a slight conical shape. A stairway led down into the main area of The Haven, which also had connections with the RHN at the far end of the town. 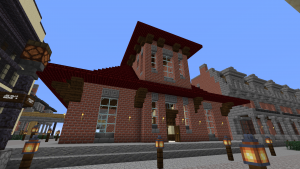 _Shako’s City of Vitruvius, the station had a Victorian-American style to it. Mainly built with brick with a red nether brick roof. Line connections could be found in a small courtyard around the back of the station, of which there were three. One northwards to Ice Cap Station, one southward to Blues Beach and a final terminal eastwards towards Oxbow Station.

The station was built in early 2021 when Vitruvius was still a relatively small settlement, and the city has since expanded around the station, making its lines snake through the city to reach the station. It was designed and built by 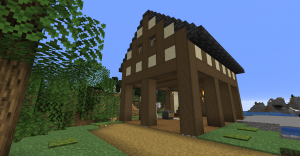 One of the later stations on the network, the station at Blues Beach was never part of the initial plan for the network but was later added after talks of linking up the City of Lotus with Vitruvius, and subsequently the rest of the SW Branch Line. The station was a terminal destination from Vitruvius at the time, but plans were in place to continue the line on to PinksVille, eventually connecting with Lotus.

Blues Beach Station served the village of the same name, a small settlement on a peninsula overlooking a large inland sea. The station was designed and built by

_Shako who also built the rest of the settlement as well as the line between it and Vitruvius Station. The station was built in a rustic style, mainly using stripped dark oak, smooth sandstone, and deepslate. 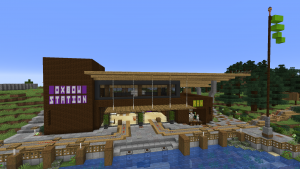 Oxbow Station was the second of two specifically built ‘junction stations’ on the SW line. Oxbow was built in July 2021 by

eybwam after being approached by

Montenator for the job. Oxbow was situated on the side of a meandering river and integrated into its surrounding very well, with a small boat dock being present on the large promenade at the front of the station.

It was one of the few stations to completely integrate an RHN shelter into its design, with stables for horses being located at the front of the station, and beds being in a smaller room at the back. The station had 3 terminals, one going southwards to Spiral Station, another going westwards towards Vitruvius while the final one continued eastwards towards South Station. These lines were predominantly built by

Oxbow was modern in design, with a large central atrium with shops on the left-hand side. Water columns took the player up to the roof where a trident take-off point was located. The station also had a small annex on the far side of the river, connecting to the main station complex via a small bridge. 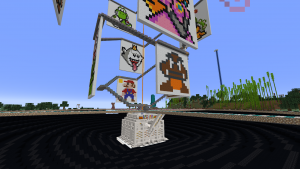 Spiral Station served the base of

HeavyDork's base which was made up of various pixel arts of iconic Mario characters. The station would be added in the centre of the spiral long after its construction, after

HeavyDork, asking if he would be interested in having a branch line station at his base.

The station had two terminals, connecting it with Alpine Station nearby as well as Oxbow Station northwards. All the lines around Spiral Station were built by

HeavyDork, and run through a large part of his base, making it a great way to view the area. The station itself was mainly built out of quartz with orange and yellow accents. It had two floors: the top featured the line terminals as well as maps; while the lower floor featured standard station amenities.

This station was built to serve the popular POI of the Stone Exchange, built by

Aiyn84. The stone exchange was a place where players can trade stone types they don’t need in exchange for more useful ones, and mainly worked on an honours system. Talks of having a branch line were started shortly after Alpine Station opened in June 2020. The station itself would be built by

Aiyn84 after the server updated to 1.17, with it being in a large deepslate mountain, adjacent to the original Stone Exchange complex.

Stone Exchange Station was illuminated by floating black candles, and while there, players could also enjoy viewing axolotls swimming in a large tank in the far side of the station. The station would feature two terminals, one towards Alpine Station with the other continuing eastwards towards Rosaline. Due to the close of Survival 4, the station was never connected to the main SRN network. 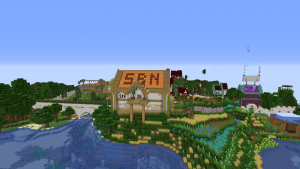 This station was built by

Snuginthesun to serve her main base and town of Rosaline. The station was built in a rural fantasy style, mainly out of oak and birch blocks, with a large SRN logo made from shroomlights illuminating the roof of the station. The station has been built for a long time and was connected to Stone Exchange Station via a branch line. From the station, the player could take many of the surrounding paths and roads to explore the rest of the town.

If it was connected to the rest of the network, Rosaline Station would have been the 10th and furthest east station out of the lot, with it serving as a terminal destination. As a result, the station only had one connection westwards towards Stone Exchange Station, however there was a second terminal in the building for a potential future expansion eastward.