M-Bay was the base of

Montenator on the Survival 4 Husky world of the Dogcraft Server.

M-Bay began construction in late April 2020, a few weeks after the Husky world was launched. Prior to that Montenator had been working on Seapoint Industries, an area nearby M-Bay, alongside

N1cM4tth3w63. The base featured a modern/futuristic build style, predominantly featuring various blocks including concrete, prismarine, quartz and glass. The base was constructed after Montenator and N1cM4tth3w63 decided to stop working on a joint base and instead focused on two separate bases a few hundred blocks apart. The base was also the first time Montenator built in a modern style, as a way to get away from his usual rustic palette.

The initial frame of the base was started on the 28th of April 2020. The main superstructure naturally curved around a mountain-side bay, hence the base's name. The base saw rapid growth in the first month of construction, with a large tower being constructed on the far left side of the base, as well as considerable progress being made in the interior of the base. Later on, a dock was also built for a hopeful connection to the CSC in the future.

On the North side of the bay, a small village was also built, called Baywater. The village connected the land between M-Bay and Seapoint Industries together, creating an unbroken path from M-Bay, to N1cM4tth3w63's base a few hundred blocks further north. In June 2020, Head Mod

simply_simon_ payed a visit to the base and gifted Montenator two posed armour stands with Scotland heads (as Montenator is from Scotland). The two armour stands became the M-Bay Gatekeepers, and could be found guarding the front entrance to the base.

July 2020 saw the addition of a second level to the base, on top of the main superstructure, featuring a map room of the surrounding area, a memorabilia room, an art gallery, a filming studio and a coffee bar. However after the second floor was created, progress more or less stalled on the base until late August, as Montenator teamed up with N1cM4tth3w63 ,

ElliotTheRedd to create the Dogcraft Hunger Games. In 2021 the base continued to see steady growth with the addition of a third tower and improvements to the bases interior. 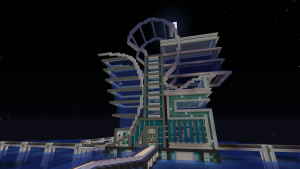 M-Bay had an official SRN branch line station, fittingly named M-Bay Station. The station had three connections. The first was a 4 minutes southbound ride to West Station at the City of Gaia. This line would be the first to officially open, being completed on the 10th of January 2021. A day later on the 11th January 2021, the second line connecting M-Bay to the nearby base of N1cM4tth3w63, Sandstone Sights, was opened. On the 25th of February 2021, the final branch line from M-Bay station was opened, connecting to

darparniox's city Takeshi. From Takeshi, the branch line continued on to the nearby city of Prosperity, then went on to terminate at North Station.

M-Bay was also a major destination of the Road and Horse Network. The base was connected to the rest of the network via M-Bay Road to the east, and Grove Avenue to the South, which also connected M-Bay to Gaia via paths. A northern road was also present which bypasses the main part of M-Bay and looped around Seapoint Industries to connect to Sandstone Sights.