This is about the network on Survival 1. For the wider organization, click here.

The Survival Railway Network (SRN) on the Survival 1 world was a large-scale transport network that provided access to locations across the world through railways. It aimed to not only get players to places, but to also give players a scenic journey that displays the best of surrounding terrain wherever possible. 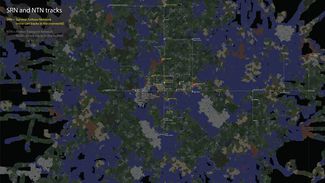 Final edition of the SRN Map, dated to August 2017

The network was centered at Spawn Station, located underneath the Golden Grannydog monument at Spawn. It extended in the four cardinal directions (North, South, East and West), connecting stations along each direction of line as departure and access points, allowing the rails to be expanded as required to connect as many destinations as possible. This has since become the blueprint of each following SRN.

'Main lines' were simply lines that went wherever needed to major destinations, whereas 'secondary lines' headed to minor locations, such as personal bases. Two main lines did not follow the cardinal structure after being deemed of major public interest. These are the Stream Station and Lackria Station lines. Secondary lines could connect up to stations or rail lines at any point using a redstone junction.

The most notable stations included Stream Station, North Station (The End portal is located here), Spawn Station and Lackria Station. Stations on the network mostly used a standard design with material variation and/or extra platforms. East Line is the longest line in the network, spanning 4941 blocks from Spawn to Swamp Stations. It is followed by North (4780), then West (2752) and South (2069). The longest individual line is from Pyramid to Swamp Station along the East Line. This line alone spans further than the entire South Line, at 2150 blocks. The shortest route is from Spawn to North Station (710).

The first SRN was Headquartered in Spawn City in a building adjacent to Spawn Station. It was built shortly after the first railways, and later expanded in May 2017.

The building functioned as a storage center for the materials used to build the railways and underwater gear, contains some offices for management, as well as a small workers area.

The official Dogcraft server had been online for six months come April 2016, and although some smaller roads and transport routes had been made, it lacked a transportation system intended for public use. A prominent figure of Spawn City, and advocate for player initiatives was _edo, who became interested in creating a rail network for many players to use, and that would travel to useful locations around the server.

After producing the concepts for a railway network, the search for a location for its central station begun. Two candidates emerged - one on the western desert outskirts of the city, and the other under the in-progress Grannydog's monument further in the city which became the preferred option, for its centrality. _edo approached the leading builder on the project, Mr_Dawgie, and the pair agreed that the monument would also be the site of Spawn Station. Thus, the SRN was born, on a day in mid-April 2016.

By the last week of April, the Grannydog monument and Spawn Station underneath it had been completed, and railway construction began quickly. During construction, in conversation with _edo, some staff members had become aware of the project, and expressed doubt over whether the plans were feasible, given the complicated nature of a myriad of permissions required to build railways through Spawn City in its mature state.

Nevertheless, permissions were eventually sought successfully, and many railways were built underneath the city roads to avoid claims, ensuring that the project went ahead. The first objective was for the first four stations to be built, each near the '1000 block spawn area' borders. West line made the most early progress, driven by Mr_Dawgie with the assistance of Kiterou and Hemo_Liadon, among others. Work at North line began in the same few days, involving negotiation through the sizable claim of darparniox, who later continued building the line with _edo. Here, the new SRN railway replaced the older personal line of TTIAR1's, which had been constructed at a lower standard several months earlier. South line was completed in quick time due to the co-operation of jjminedogs, who owned most of the southern city and assisted in rail construction. It was due to this that South Station was the first ever SRN station to be constructed outside of Spawn, on the 16ᵗʰ of June. East line was started after the general public and staff began to have confidence in the SRN project during late May. The line was a late starter but progressed quickly, with East Station being built around the same time as North Station in early July. West Station came slightly later in July or early August.

After the task of completing the initial four stations, attention turned to constructing a railway to Stream Town, the major city on the server at the time. Plans had been made in advance, but the excitement surrounding the city had begun to pass once the railway had been completed. Meanwhile, RavenSkyHawk69 had made good progress on furthering the East line during July, and darparniox had continued working on the North line, culminating in the construction of Mesa Station in early September. By this time the NTN had been created in the nether, and had become the focus; slowing SRN progress, but also adding value to the network. The previously built Lackria line was upgraded by William278 and _edo, and granted main line status. Wietselubbers had continued the South line, whilst expansion resumed on the East line, with Pyramid Station as the result. First natedogsquishy and then RADxUK extended West line in the latter part of the year.

Section of North line on the way to Mesa Station

End of the 'Edo Era'

Communication between builders on throughout the project in 2016 was limited to in-game interaction and server mail. Several builders faded from the server without explanation or contingency, hindering progress and cohesion. All communication was centralised - _edo delegating, planning and discussing one on one with each builder, a heavy burden. He had become steadily less active and engaged with the project in the last two months of the year until becoming completely inactive after Christmas, a trend therefore effectively mirrored in the productivity of the SRN as a whole.

A chance meeting between _edo, in his only visit to the server at that point of 2017, and one of the previous SRN builders, darparniox, occurred in mid-February of the year. _edo felt that he would never return to the server permanently, and the two came to the mutual agreement that darparniox would 'conduct' the activities of the SRN therefrom.

Along with non-existent progress of the SRN in 2017, virtually all previous builders on the project had become inactive, aside from darparniox. The sole player was largely unknown on the wider community, and had no experience with many of the facets of his new job. Left to announce his own new position in the absence of _edo, he had no intention of keeping the role permanently, instead hoping to hand it off to a more qualified player when such a player arose.

During the following month, progress was very slow. North line inched forward, whist West line required repairs and an adequate station at line's end. The result of the latter being Taiga Bay Station, in late March. Near the same time, Aeghu asked for permission to build a railway to his base, east of Spawn. As the SRN line had not reached the distance, an agreement was struck in which he would continue the East line itself. During April, Brianetta began construction of a railway far South with the intention of reaching the Mall, and made contact with the SRN. OPwrecker joined the server and made an immediate impact, working with Aeghu to complete a secondary line and joining darparniox on the North line.

OPwrecker would shortly afterward make perhaps take the most important action in SRN history; the unprovoked creation of the SRN discord on the 5ᵗʰ of May 2017. This date coincided closely with the return of _edo from his extended break. At the time, discord was not a widespread tool in Dogcraft sub-communities. Whilst unexpected, the channel proved a masterstroke for communication between the few members of the resurfacing project, provided lasting group messaging and enabling extensive discussion, since a trademark of the SRN. The creation of the SRN discord channel marked the change in the SRN from just a building project to the organisation it is now.

The first and major project the fledgling team undertook was the extensive renovation and completion of the South line to Far South station, which was lagging far behind the other three. The resulting process of re-planning, executing, and then resurrecting the end station to a workable form as Dressrosa Station was a memorable and valuable experience for the SRN team, and one of the last projects of the world. With the announcement of a new 1.12 world at the start of June, progress would wind down. The final notable build on the original world was Aeghu's completion of Swamp Station in July.

North Station, and the end portal