Grand Central Station was located at the center of the world, next to the spawn point of the world at (0, 0). It, alongside the Spawn Basin of Survival 3, was built in Creative Mode prior to the release of the Survival 3 world at the request of ReNDoG himself.

The station's design was based on an aquatic theme to coincide with the new Update Aquatic. As a result, the station was positioned underwater in a drained basin alongside the rest of spawn. GCS featured a large, spiraling roof which was the highest structure in Spawn. In an adjacent building, the portal to the NTN Hub as well as the server end portal were located.

To begin your journey down each of the four main lines of the Survival 3 world, click through to the article on their first station: 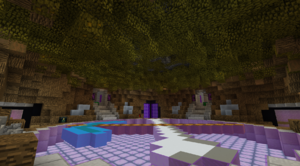 A Cyberdog cog mural could be found as the floor of the hub, complete with a pickaxe and a bone, backlit by sea lanterns. Information and an exit to the nether was accessible at the four corners of the room.