The North-Western Tulip Alliance (NWTA) was a group of players with bases in the most North-Western corner of Survival 3. It was formed by

Mr_Quasi on the second day of Survival 3 being open, and the current group of 7 players was formed in the 2 weeks after that. The group did not accept requests to join. The group's symbol was an orange tulip, represented in the name and by a banner.

Mr_Quasi created the group on the 21st of October 2018, inviting

marbou9 right away as they were sharing a base on Survival 3. Mr_Quasi had also invited a few friends from Survival 2 to live in relative proximity, to avoid getting into claiming trouble with unknown neighbors later on.

RcrazyPT joined the next day. On the 25th of October,

Arkhangellsk joined the group. These 6 started a few projects, and a week later on the 2nd of November, returning player

heatjr was invited to join the Discord and base in the area. Since then, the group remained closed.

The first project executed by the NWTA involved the nether fortress that was present in the NWTA area in the nether. It featured a rare double blaze spawner, transformed into an efficient farm by Mr_Quasi. In the beginning of Survival 3, there were no public XP farms available yet, and as blazes drop double the XP compared to for example zombies or skeletons, a double blaze farm is one of the best possible spawner-based XP farms, which supplied the NWTA with enchantments as well as plenty of fuel and mobheads.

After the double blaze farm, a project to transform another section of the fortress into a wither skeleton farm was started. This involved all members of the NWTA, using TangoTek's design. It was being used to collect wither skeleton skulls for the entire duration of the world. 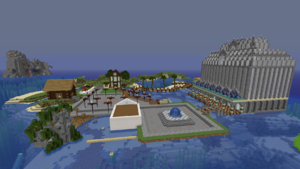 In the early days of Survival 3, the Mall wasn't built yet and the chest shop plugin was not available yet, leaving the economy to be mostly diamond-based. There was a temporary Trade Hall run by a few players with small plots to sell wares, but theft occurred on a semi-regular basis as there was no protection on chests, so not everyone risked selling their wares there. The members of the NWTA decided to band together and have a small communal area for theirselves, where they could build nice looking shops for each other to buy items from. When the Mall eventually opened, these shops lost their original purpose, but they still remain in the area.

This communal area of the NWTA since transcended its original purpose, with the square being decorated for various holidays such as Easter or Christmas, the members leaving each other presents, a grand map of the NWTA area in the style of the Grand Survival Map project, and the main station of the Inter-NWTA Railway.