Nergal Station was the base of Mrs_Diss, situated in a mesa in the far northeast of the Survival 3 world. Mrs_Diss described it as a far future Mars Colony (Nergal is the Babylonian name for Mars), at a stage where terraforming had just made Mars habitable for unprotected humans.

Nergal Station was built in a resolutely futuristic style, centered around white concrete, cyan terracotta, concrete powder, glass, and light gray glazed terracotta. Accents in other colours and materials were also found throughout. On the other hand, stone and wood were almost completely absent.

Individual buildings varied between soaring towers and vast landscrapers. Many were built into the landscape, taking advantage of the vertical scale offered by the plateaus and canyons of the mesa. Nergal Station also featured two large handmade lakes; one an extension of the adjoining ocean under a naturalistic terracotta arch, the other flooding an entire canyon behind a concrete and glass barrier.

Integrated into the base were a number of farms, many of them completely underground or hidden. These included a cow farm, kelp farm, several iron farms, gunpowder farms, slime farms, an instant experience farm capable of mending 24 tools when fully charged, and notably a 184 furnace array.

Nergal Station was connected to the Nether Transport Network via the Cool Kids Club (CKC) tunnel at approximately the 16,000 block marker on the north line. However, the associated nether hub was not completed.

"I knew I wanted the dirty red mesa cliffs, and the deep blue ocean, and pristine white towers apparently defying gravity as they rise above the surroundings. All the lore came later, it really crystallized when I built the garden with all the plants and green things, and I realized that this is not earth." Mrs_Diss, on the formation of the city's lore 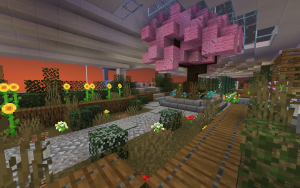 The first build in Nergal Station was the Memories Of Earth Garden. It was a slender tower perched atop a cliff, with foundations reaching down to ocean level, and topped by a large flat approximately-ellipsoid structure. Built into this structure was a garden, centered around a large Sakura tree. For many Martians this was a place of great spiritual significance; the soils of the garden having been imported at great cost from various locations on Terra, representing the origins of the Martian peoples. The Sakura Tree itself was a sapling from a sacred grove in Japan, transported to Mars with great ritual. Many Terrans also considered the garden to be of spiritual significance. Being appointed gardener of the tower was considered a great honor in Martian society.

To the west rose the reactor tower. Four power beams were reflected up and down between precisely positioned nacelles, which carefully manipulated and layered standing waves of energy in order to reach resonant frequencies of inter-dimensional m-branes, thus tapping the vast energies available in parallel dimensions.

"This is of course hogwash, but it sounds impressively futuristic and advanced." Mrs_Diss, when it was pointed out to her that this didn’t make any sense 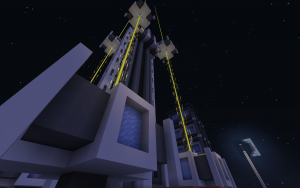 The power generation tower in Nergal Station. The power beams are sparkling with excess energy from parallel universes.

Perched on the plateau between the two stood the people’s resource palace. The original Martian colonists were all highly competent scientists picked to represent a large portion of Terran nations. Once on Mars, in a harsh environment but with vast technological resources at their disposal, and far from the controlling interests of Terran governments, they quickly developed a very egalitarian techno-utopia. The vast stockpiles of resources stored here, freely available to any Martian who requires them, was a symbol of this achievement.

To the east lied the tented town of Old Nergal City. The very first habitats on Mars were little more than warrens of tunnels dug into cliffsides, while the surface of Mars could only be accessed with pressure suits via airlocks. This style of living was of course unsustainable, and soon the new Martians moved into tented towns. Inside the tent a habitable atmosphere could be maintained and though it was still very crowded people could move around quite freely. Most tented cities had long since escaped their envelope and taken down their tents. Old Nergal City was maintained as a historical site, including the intact tent. Nergal city was home to at least 200 residents at once, though census numbers of the period are remarkably inaccurate due to the chaotic nature of the early stages of settlement, and numbers might have been almost twice as high.

Old Nergal City followed a vastly different build-style than the more modern areas of Nergal Station. This represented the relative scarcity of materials available to the early colonists, who had to rely on locally available and largely unrefined materials.

To the northwest was the construction site for the Space Elevator and the associated Spaceport. Upon completion it would be humanity's first space elevator, vastly reducing the cost to deliver both passengers and freight to space, and firmly cementing Mars' place as a central hub in the nascent interplanetary trade network. 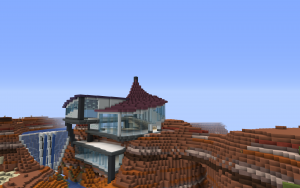 A view of the Smythe Foundation by the Verdes Chasma Barrier

To the west and overlooking the Verdes Chasma Barrier and Reservoir lied the Smythe Foundation Off-Planet Ark for the Fine Arts. Founded by the Smythe Family of Ouranos, the Foundation aimed to preserve as much of human culture as feasible in the event of a cataclysmic catastrophe on Terra. With this goal, they had set up a vast collection of precise copies of Terran artwork on Mars. This also served to enrich the cultural lives of Martians, who were thus able to experience Terran Art in a format indistinguishable from the original.