Ragecorp was a player organised build group led by 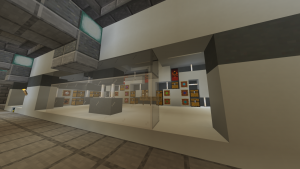 Initially founded as Concrete Corp by ragecage295 and necroignis to sell concrete in the Tickles Trade Mall. In early 2019 they moved the concrete business to the official mall where they built the second version of Concrete Corp, which quickly became a prominent shop in the mall, often simply known as "the flower pot because it looked like a giant flower pot. The second floor was added quickly afterwards known as "glass-co" in which glass was sold. It served as the main outlets for concrete and glass on the server. Quickly afterwards, necroignis left the corporation to focus on his own builds. To assist in material collection for the servers only supply of concrete Ragecage295 employed callmeguy. callmeguy left later, quitting from Minecraft as a whole. Concrete Corp was renamed to Ragecorp after Ragecage295 and

dawiie rebuilt the shop in the mall

A few months later in 2019 Club Phoenix's construction began, led by ragecage295 and dawiee(who would later found Banana Bay) in July 2019. To assist them they announced it in public chat and gained the interest of many players, most notably Princess223. It was finished in mid-August 2019 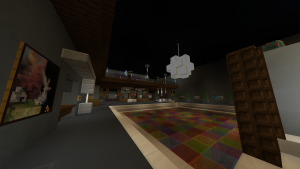 Ragecage295 started constructed pharaoh park, a theme park, quickly afterwards and asked his new friend Princess223 to assist on the project. It was around this time that Ragecage295 reorganised ragecorp into a build group with Princess223 being the Vice President. Princess223 was and still is the primary competitor to the Ragecorp shop, selling concrete and glass. It was started without Ragecage295 being aware of the Hermit's minigame district "Hermitland" or the dogcraft minigames district ratanga junction.

Main Article: Ragecorp Tower In September 2019, Ragecorp constructed a tower to serve as the headquarters for the company. Over this period they hired many employees including their new General Manager

__Stormaggedon__. It was around this time Club Phoenix was opened by 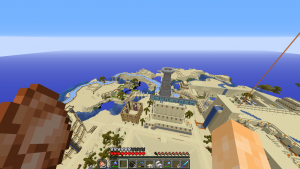 __Stormaggedon__ in November decided it to build a Zoo. Princess223 and __Stormaggedon__ were "rtping" around the server to find a location for the zoo, they stumbled upon an area which they thought was great for a Christmas district. ragecage295 was not supportive of the idea because the zoo was of more interest to him. However in spite of the company president, they pressed on and started construction as the Christmas project had a time limit (Christmas 2019) unlike the zoo which could be built at any time. Unfortunately the area in which the construction started was a biome in which rain happened, melting all the snow. TrainerMoon suggested snowy taiga to the north of his base to build it in as it had a large natural bay which would serve as an ice rink. The Christmas district quickly became the primary focus of Ragecorp, stopping work on all other projects. In December ragecage295 decided to reorganised the company's roles to make the company more realistic making himself the CEO, Princess223 the President and__Stormaggedon__ the Vice President, along with many other employee's gaining new titles. In late December construction began on Ragecorp's SRN branch line, linking the headquarters to Cool Cove Station. Construction was led by

expedtadam, with the help of 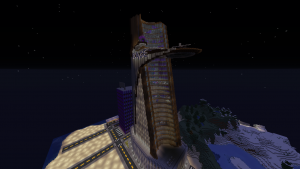 In January, attention returned to the zoo project. The aim was to get living specimens of every creature in Minecraft that didn't have 2 legs. Nether tunnels were built to various parts of the server to help transport the creatures. It is accessible via an official NTN connection on the South Line. At the same time the rail line from Ragecorp Tower was constructed to 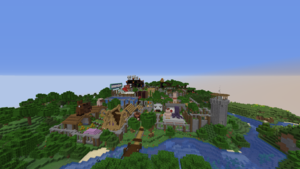