Raid Point was a settlement on the Survival 3 world of the Dogcraft Server. The premise of the town was to provide a safe area for players to perform Pillager Raids, away from their own bases. 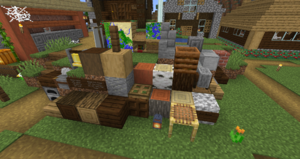 Raid Point building palette, with the first battle hut in the background

The town was built around the first battle hut, found near it's center. This battle hut was used during the first raid in the fledgling town during October 2019. It is inscribed with the names of the players who completed the raid:

JustEnt. The town used a plot based system, in which the plots ranged between around six blocks wide to around ten which give each build a unique feel. Each plot was a personal dwelling and had to adhere to the build palette which could also be found in the center of the town. Overall, the town's main objective and stylistic features are profoundly influenced by the recent advent of an update to Minecraft 1.14 on the server a few weeks beforehand, which had brought both pillager raids and many of the blocks used in the palette. After the first raid, plots filled up steadily until the end of the year, and other major features were built, including the tower in southwest, and Wandering Trader statue in the east.