The Ouranos Metro was a transport system on the Survival 3 world of the Dogcraft Server that served the city of Ouranos on the server, connecting the various builds of the city together by underground railway tunnel. The system was planned early on into the development of the city, with the aim being to serve a route between a stop at Lackria Plaza in the center of Ouranos and the Castle Plaza, however as the city grew plans changed to serve a larger number of stops. Of the originally planned route, five stations were complete. 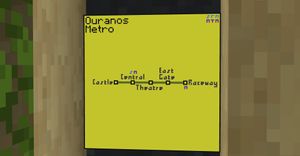 William278 and the city of Ouranos from Mayor

misterblue28. The map used the yellow and green colour scheme and could be purchased from all Ouranos Metro stations for DC$100. It also marked stations with access to the Survival Railway Network and Nether Transport Network.