The Spawn Banner Gallery was a building in Spawn City which showcased banners for the general community. It was to the north of spawn opposite the SRN HQ and adjacent to

The banner gallery was first conceived by

_edo as a place for players to place their personal banners.

Skelleton123 kindly donated his spawn plot to the cause. The building and management of the building was delegated to

expedtadam during late 2019. expedtadam built the building initially in creative, to mimic the buildings in inner-city Melbourne which consist of multiple different buildings merged together. Additional advice came from _edo. In November, the building was constructed by expedtadam and was opened later that month.

Floors of the Gallery 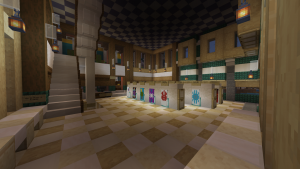 2nd floor of the gallery