This article is a Work-in-Progress. Feel free to edit it to improve it! 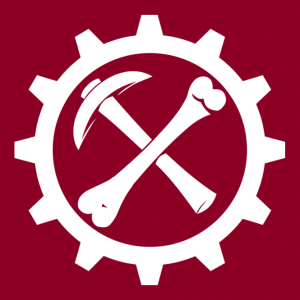 "Our very own MudDog has created what can only be described as a rediculously epic logo to represent Dogcraft.net and the Cyberdog Community - it is now our OFFICIAL Cyberdog logo!!" ReNDoG, 16th August 2012

The Dogcraft Logo, sometimes referred to as the Cog, Bone & Pickaxe, is the logo of the Dogcraft.net community.
It was originally designed by MudDog after the founding of the website and was unveiled on the 16th of August, 2012 in a forum post by ReNDoG.

The logo consists of a thin cog comprised of twelve teeth. Centrally positioned inside the cog is a pickaxe facing -45°. Overlapping the pickaxe in the mirror direction (45°) is a bone. These three elements - the cog, pickaxe and bone - all represent the three pillars/themes of the community upon which members are united by; the cog representing the steampunk motif of "Cyberdogs"; the pickaxe representing Minecraft and the bone representing ReNDoG himself.

The logo was designed by MudDog and was unveiled by ReNDoG himself in a forum post on the 16th of August, 2012. Originally, the design used two colors; white on bright red, however various iterations of the logo have altered the color scheme. With the website redesign of March 2020, the design and color scheme of the community was given an overhaul and with it the color of the Dogcraft logo and official variants (see below) changed to use a maroon background.

To accompany the Dogcraft logo, ReNDoG and his Dogcraft community have used a few font faces. Most commonly accompanying the logo is the aforementioned Visitor BRK font family used in ReNDoG's user icon on YouTube. The font has seen heavy usage, particularly in graphics for earlier versions of the Dogcraft.net site, though it still can be seen in ReNDoG's intro and outro screens. With the community branding overhaul that took place in March of 2020, the Nunito Google font saw usage as the accompanying font, which now sees use on the website, Wiki and new Dogcraft media.

Since the logo was created near the start of the Dogcraft community in August 2012, it has seen widespread use, becoming a symbol representative of ReNDoG and his fans. Through the years, the logo has been adapted and parodied extensively, allowing it to be used in media for a multitude of cyberdog related projects, events, and services. This is most commonly achieved by replacing the pickaxe and bone positioned inside the cog with a different icon or symbol. Perhaps the most recognizable parody of the logo is ReNDoG's channel icon itself; a red-on-white variant of the logo with the text "RD" in the Visitor BRK typeface replacing the pick and bone.

"The thinking behind this logo is: 'Rendog' is made up of two equal parts - Half me (the Dog), and half the Cyberdog Nation (the Cog). This logo is trying to show how we work symbiotically together, how you guys are as much a part of this as I am! :)" ReNDoG, Twitter

In October 2020, ReNDoG held a vote on his Twitter to help decide on a design for a new logo, with the idea being that it would replace the existing branding on the site. After a few days, Option 3 (pictured) won the vote and was selected. As of March 2021, the new design has yet to be rolled out across the community, though appears in a few places such as the lobby navigational maps.