Evergreen was a kingdom on Survival 3 created by

TheWhiteTigerNL, and later with help mainly from

Riot_of_Penguins on the Dogcraft Server. This kingdom started with just a tower, but had grown a lot throughout the year. It consisted of many different places, but was mainly known as a medieval fantasy inspired base with a city, a village, two castles, and an elven area. The area also had several islands owned by good friends of the founder.

How it all started

It all started way back in 2018 when TheWhiteTiger first thought of the idea of creating a kingdom with several districts. First a tower, some farms, and the stables. This would get changed a couple of months later. The stables were the oldest standing build that was there from the beginning.

New areas began with just a village, but it quickly developed into some new areas. After 2 months of the base existing, TheWhiteTiger started building a wall for the main city of the kingdom. This was a large build itself, and remained under construction.

After a while, a district named Solaris began development consisting of several houses, a phoenix statue, and a wizard tower overlooking the nearby swamp. This was a fun idea at the start but it quickly got changed into being a lighthouse on a custom made cliff (which was still in the building progress) besides a custom mountain.

Some time later, TheWhiteTiger started working on the Castle of Evergreen. After 3 weeks of building up the castle with help from

Taurent, they decided to do some terraforming around the area. When TheWhiteTiger got impressed by Taurent's terraforming work he gave him the task of terraforming the whole place. 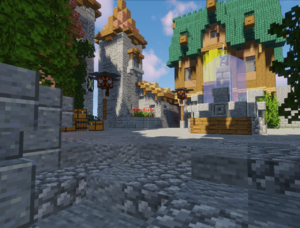 A look into the city of Evergreen

This kingdom had many different builds, all with other functions and history.

Places Evergreen had embassies in: