Malls are staff created and sanctioned commercial districts. They have been created in every Survival world of on the Dogcraft.net server, including Survival 3. This Mall utilized the quickshop plugin to facilitate a marketplace for items that can be found in Minecraft. Items could be bought and sold in Mall shops using Dogcraft Dollars, the servers currency.

Similarly to Survival 2, Survival 3 opened without the utility of a Mall, and again, players strongly requested that one be put in place at short notice. Once again, a player-run alternative was created to fill the gap, in the form of the (Tickles) Trade Hall. While the Trade Hall was highly successful, the diamond currency trust system created regular issues with stealing.

The server Mall was opened on the 21ˢᵗ of January 2019 with a new layout. It features open water plots split into yellow, blue, orange and green districts, builds by Build Team members near the centre, and a railway link. A rush for plots occurred and all 133 of the original plots were rented within 20 hours of the Mall's opening. A quick response from the Build Team came two days later when the white, gray, black and purple districts were added, bringing the total potential number of plots to 233. 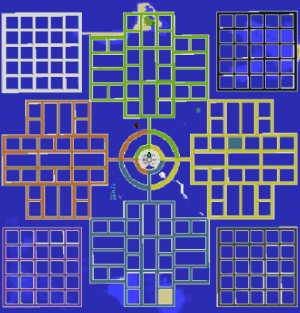 On the 30th September 2019, the build team then came in to add a further 16 plots. The grand total plots now reaching 249. Certain shops rose to become prominent. Mc_Lelouch and Dutchsoccer's Home Tree shop was the earliest to feature many late-game items and its creators headed the richest list for the early period of Survival 3. Again, ramokhan began making several map artworks to great effect. The art became very fashionable, with many players adopting the business model in the early part of 2019, creating major demand for concrete in particular. Further into the year, jmsvvr's became the default shop of choice for its range and pricing, making its owner the richest on the server.