The Dogcraft Spleef League (DSL) was a player-run sports league run on the Survival 3 world, which held frequent games of Spleef, a popular minecraft minigame, in player-built arenas around the world

Spleef is a common mini-game in the Minecraft community. It is played on a tower-like arena with multiple floors, which are made of an easily breakable material such as dirt or snow. Underneath the floors is a pit of some kind. The objective of each player (or team) is to be the last standing on the floor by digging the ground underneath others and causing them to fall.

The DSL was made up of teams representing a group of players or settlement. Each team had their own uniform and roster. Teams built their own regulation size circular 25x25 arenas to host events at, in addition to the neutral DSL Arena near the SRN's Tidal Station. Games were played with three or four player teams.

The league was on hiatus between April-July of 2019, after a decline in player interest, however had returned following a resurgence of interest, partially due to the SRN base tour mentioning the popularity of the sport.

The idea for a regular spleef league was thought of after several impromptu games at the spleef arena of the major Survival 2 city of Akkara.

LAK3RS, a mayor of the town, floated the idea that a more formal incarnation of the day's events and several groups immediately expressed interest. Unfortunately, this enthusiasm came only three days before the infamous 15ᵗʰ of October 2018 announcement that existing worlds would be deleted five days later. It was deemed that the project be put on hold.

During the early part of Survival 3, the idea was largely forgotten in the process of establishing new settlements. During February of 2019, a chance conversation during in-game chat brought the subject back up after

bricksburger had thought of a similar concept himself. From here, the process of organizing teams, format, times and arena building occurred, and resulted in the league.

The opening event was conducted to much fanfare. A sizable amount of the online player count attended to cheer on the four participating teams. Teams first played a best of three semi-final before a best of five final. The first tournament was taken out by an impressive Chronia-Ouranos combined team (Chronos), never losing a point during their two game wins. Second after losing the final was Barkenstein. A combined Bricksburger-SRN team edged out Deliverance in the third-place playoff. The winners received 60,000 dcd for their efforts, and unique prizes were handed out to all, corresponding their place in the tournament. This convention became customary over future tournaments. 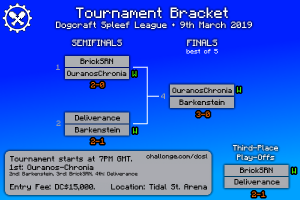 Final results of the opening tournament

The second tournament ran successfully and in a similar manner to the first, albeit after a one day delay. The dominant 'Chronos' team returned, once again managing to win every point they contested and this time beating Deliverance in the final.

The next tournament was played at Chronia where the newly built arena ran into some issues. The player launch system misfired, and pitfalls led to deaths between games. Nevertheless, the games were completed successfully although somewhat disrupted as a result. With only three teams attending, a round-robin system replaced the usual knockout one, with the two teams who scored the most points during their two games competing in the final.

This event was held as a part of Ouranos Day, being the final event on the program. With four teams attending, the usual knockout format returned. A change to have three players make up a team as opposed to the previous four was well received during this tournament. Ouranos continued their remarkable form, taking their second straight win, after winning another two in collaboration with Chronia. However, some controversy surrounded the result, as the final two players in an otherwise tied game both fell at the almost the same time, and opinion had to be taken as to which player had fallen down first. 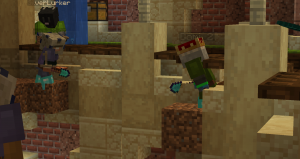 A tense moment during the Ouranos tournament

Taking place three months after the previous one, in an effort to reintroduce interest in the league and to capitalize on recent hype with the mention of the DSL in a ReNDoG base tour, SRN conductor

darparniox organized a fairly impromptu game at the recently finished arena situated adjacent Coconut Station. Unlike previous DSL matches, this event was structured to allow anybody online to compete by joining a colored team and this was successful in recapturing interest making the event highly attended. The only returning team was team Chronos, who once again dominated the event beating out the Green team in the finals. The town of Calafort also put up a team, however failed to make it past the first round. A team organized by

FearMyLittlePony beat out the Orange team to earn third place. 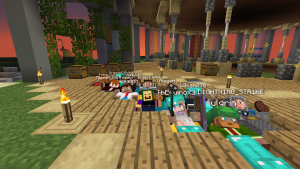 Players sleeping to ward off phantoms during the game. The night was successfully skipped.

FearMyLittlePony held a game the following week in their own arena, following the same format as the previous week's event. Much like the previous event, this one was well attended and proved popular, albeit some shenanigans with anvils and the arena design did cause trouble. Once again, Chronos dominated the bracket beating out returning team Barkenstein to win the tournament. Team Calafort performed better this time around, coming in third place by defeating the Black Team in the third place play-offs.

On the 18th of August, 2019, Chronia would once again host a DSL tournament, to a high attendance.

Barkenstein hosted for a second time on the 15th of September, 2019.

Ouranos City would see a second use of their arena on the 29th of September 2019.

This was the second DSL tournament hosted by

legowar1508 but the first to be widely played or recorded. The prizes included rockets, diamond blocks, shulker shells, and fame.

Due to the excessive death count witnessed at the match player

dmgdog sued legowar1508 for negligence, though he was later cleared of all charges.

Barkenstein would host for a third time on the 27th of October, 2019, making the town have the most hosted games of any.

Erebus Opening Day saw the return of spleef to Dogcraft after a 4 month break. The players were separated into teams of 3, played with a 'knockout' format. Prizes were handed out at the Opening Day Closing Ceremony.

Free For All Events

In addition to the regular tournament games, since the restructure of the DSL following high demand in July 2019, the DSL started holding Free-For-All (FFA) games. These were typically held in "off" weeks, where no tournament games were being played.