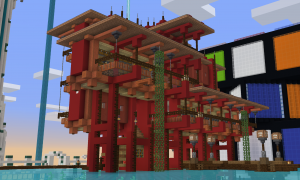 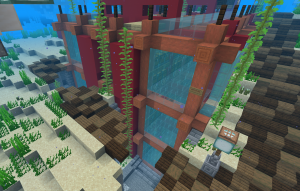 The Post Office was a build in Spawn City on the Survival 3 world of the Dogcraft Server. It let players send items to other players with a mailbox.

The post office was located right next to the Spawn Basin. Many players used this to send gifts to other players, and it was commonly used by event leaders and mods to award prizes. The office held 264 boxes, 242 of which were claimed when the server shut down.

The post office contained seven floors, with four above the water and three submerged.

Mailboxes consisted of a dropper, a hopper, a large chest, a redstone lamp, and a sign. Items were placed in the dropper, which was open to the public, and got funneled down into the claimed chest. A comparator would power a redstone lamp beneath the chest if there was an item in it.

To get a mailbox, players went to the floor with the correct name range and found an unclaimed chest, right- then left-clicked with a golden hoe to claim the chest, and then replaced the sign with their name.

Advertising was not allowed.

_edo with help from

marbou9. Work on the project was started in early July 2019 and was opened on the 23rd of July. Over the existence of Survival 3, the post office was expanded a couple of times on the back side, to remedy the increasing demand for more mailboxes. These expansions were anticipated in the original design.

: This section could benefit from the addition of a table for better organisation.

The floors of the post office were arranged by the first letter of the player's IGN. Floor 3 held A-C, floor 2 held D-F, floor 1 held G-K, the sea level floor was information, floor -1 had L-O, floor -2 P-S, and floor -3 had T-Z and 0-_; some players' post boxes were on different floors than they should be, likely because of lack of space—you could check with ctrl+f if you can't find someone.