Barkenstein was a plot-based town on the Dogcraft Survival 3 world, created and owned by Hiulgrin since the 24th October, 2018. The town was originally created to feature a "Mount Hermitmore"; a mountain built with the heads of members of the Hermitcraft server.

Since its founding, the town had attracted significant builders with several notable builds being constructed such as a station, a blimp and a large castle which overlooked the town, not to mention Mount Hermitmore serving as a reminder to the town's beginnings.

Barkenstein was divided into plots which interested players could get for free. Plots were identified by the road they were on. Some plots contained embassies for different settlements on Survival 3.

Players dressed up at the spleef free-for-all

Barkenstein held an official opening event on the 3ʳᵈ of August 2019. Events included a statue building contest, free-for-all spleef and the 'Skeletonhorse Steeplechase' in which players raced skeleton horses around a circuit of the town. All three were well-received on the server and were successful. 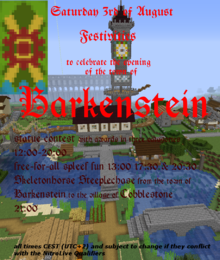