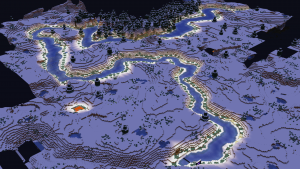 River Raceway, one of the Dogcraft Ice Boat League tracks.

The Dogcraft Ice Boat League is a player-run events organization, which runs tournaments using the several ice boat tracks around the server. The sport utilizes the ability of boats to move on ice in the game. The league is currently on hiatus, as of the end of the Survival 3 world.

mperreault. Its inspiration is taken from Rendog's Ice Boat Track "Sahara Speedy Pines Raceway" on Hermitcraft 6. The idea came to

TrainerMoon when racing against various other players at

TickleMeUnicorn's drowned farm where he had had temporarily set up a small ice boat race track for people to race around while loading more mobs for the farm.

After a short unofficial tournament was held at this track, mperreault asked TrainerMoon and

Excaliber_FC to test out his new ice boat track he had quickly designed. After a couple races, TrainerMoon came up with the idea to create a series of race tracks all over the server and host tournaments at these tracks. Thus, the Ice Boat League was born.

Originally it was just run by TrainerMoon and mperreault. However, the two soon enlisted the help of Excaliber_FC to take part as the official League Commissioner. His job is to help run tournaments to make sure they run smoothly, like a referee. They went on to host two tournaments that were both quite successful.

In November of 2019, TrainerMoon hired the help of

Located in the overworld at coordinates (x: 1104, z: 785), the sunflower plains biome island was discovered by TrainerMoon on his first week on the server in August of 2019. For the next 4 months, the Ice Boat League staff worked together to transform the island into a gorgeous modern beach resort centered on an ancient greek temple. It was connected to the SRN as a branch line from the South Station and was connected to the NTN via the East line at the 1k block marker on the right.