Erebus Opening Day was an event held on the 23rd of February, 2020, to officially open The City of Erebus to the public. The 8-hour event consisted of many events and competitions for players to win prizes. The day was planned by Mayor

Preparations began early January, when dmgdog acquired the help of additional players to assist in the planning for Opening Day. Events leader, William278 offered to help run the day, using his experience from previous open days such as Akkara and Ouranos opening day events. Shortly before the official announcement was made, a teaser trailer, filmed and edited by

Txp_ was released on the Erebus YouTube Channel to attract some attention to the city. The event was announced in the Erebus Discord Server by Mayor

dmgdog on the 9th February 2020. The next few weeks were dedicated to preparing all the events and decorations for the grand opening.

Itinerary for the day

A range of events were played throughout the day, with great prizes to be won. Before the events kicked off on the server, an 'Erebus Introduction Video' premiered, giving players an insight to what to expect throughout the day.

The opening ceremony was attended by over 30 players, which included the ribbon cutting on the Town Hall by dmgdog, followed by a fireworks display, to the south of the city, which were kindly donated by the Events Team.

William278 led the indepth tour of the city, providing history and interesting stories of Erebus during it's initial development. Players were then invited to claim a plot within the city, however due to high demand, all plots were taken at that time.

The elytra race was the first event of the day, and consisted of a mixed course, flying around the island, and within the city. Each race consited of 3-4 competitors, with the top 2 players progressing into the next round.

nossi_ in second and third place. 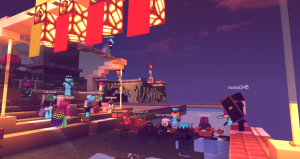 Following the elytra race was the ice boat race. The track was built over the void, and entered tunnels underneath the city.

Nathan402603 was victorious this time round, with

The most anticipated event of the day was a twist of the British gameshow, Who Wants to Be a Millionaire?, where players had the chance to win up to 1,000,000 dogcraft dollars.

William278 hosted the show, where he asked each competitor a series of trivia questions about Dogcraft, and Minecraft. Suprisingly, the greatest amount won was by 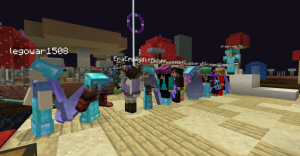 The mini-golf tournament was an more relaxed event, as players made their way around the 9 hole course individually, with officials keeping track of the scores. Each hole increased in difficulty, as players attempted to throw their snowball into the hopper over an ice path. Water features were introduced into the later holes, which challenged the players as if your ball landed in the water, you must return to the start. A joint victory for

Viscius as they went home with 15,000 dogcraft dollars each, and a set of tridents for the Chronia Country Club.

Spleef players. The format was based on the previously popular Dogcraft Spleef League.

The final event of the day saw the return of spleef to the server, after a 4 month hiatus. The players were separated into teams of 3, played with a traditional'knockout' format. Team Silverfish knocked down Team Shulkers in the final to become the champions. Silverfish consited of

The closing ceremony took place at the mini-golf area, where prizes were handed out to all the winners throughout the day.