Cool Cove Station was a major station along the East Line of the Survival Railway Network on the Survival 3 world of the Dogcraft Server. Serving six destinations, Cool Cove was a major transport hub on the server and held the record of most railway connections to a single station in the history of the network, beating Tundra Station on Survival 2 with just five. The station featured a clock tower with elytra takeoff platforms and a Nether Transport Network connection.

The station was built by

NIGHTMAREx84 with assistance from Line Manager

William278 in time for Ouranos Day on the 13th of April, 2019. The station featured a large clock tower design with two terminals; one serving Tidal Station and the other serving Meadows Station. A third terminal with two floors served four branch lines (though Ragecorp was accessible only via a stairway further down) as well as an access nether portal to the NTN. A SRN+NTN map was also hung there, as well as a map of the station surroundings. The clock tower itself could be accessed via ladder and featured a crafting station, phantom shelter, and at the top was an elytra take-off point. 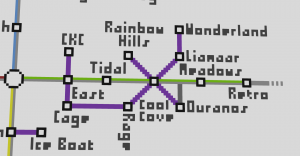