The Temple of Harmony was the base of

Dudelmaster on the Survival 3 world, built as a "place for everyone to chill and collect some chi".

The temple was built in a Chinese style with spruce and Nether Bricks. Players were free to explore the inside of the temple; there was no danger in getting hurt by any of the magma blocks used. The complete temple was also lit up so no mobs could spawn inside. In the middle of the temple the player could find the Wishtree.

There were lots of windows in the higher levels of the temple, however you could still go outside and use the roof of the level under as balcony. Visitors were also able to have a look in the Chorus Fruit garden.

The entrance to the Elytra Course could be found in the Garden. It was a door in the ground marked by a rocket. The course itself got several Moduels. The goal of the course was to fly through it as fast as possible. For their own safety, players were to not use rockets to fly faster. The way was marked out with magenta terracotta blocks (with arrows on them pointing in the direction to fly to). The goal was the bubble column elevator at the end.

At the close of Survival 3, the course was 90% finished. Dudelmaster still needed more Quartz for the last part. 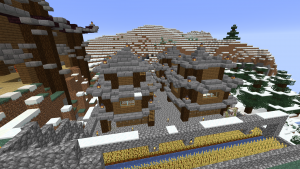 The Village next to the temple

The Village on the other side was used to breed villagers. Villagers with good trades were stored elsewhere. The village was kept in the same style as the main temple, but without any decorations on the inside.

The Wishtree could be used once a Minecraft day. To use it the player had to throw any item in the water behind the signs that explain how to wish. If the player is lucky they will hear a sound and get a reward. If the Wishtree was already used that day, items would still get in the System but the player would not have the chance to receive a reward. 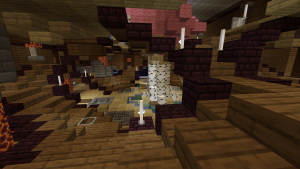 It was located behind the garden. Not only was it huge and awesome looking, but under the statue was a riddle to solve.

Tip if you can not live without solving the riddle, ask Dudelmaster. The riddle was very hard and only true fans of the game the statue is inspired by can solve it.

The temple was in a snow biome near the sea. The closest station on the Survival Railway Network was Tidal Station

There were several pets inside the claimed area. Some are not hidden like the wolf. But Berni the polarbear liked to walk around so he was hard to find. Somewhere in the ceiling was a phantom named ˋBad Chiˋ.