" My new project is a Cyberdog Wiki which will log the cyberdog server's worlds, builds, bases and more"

The Dogcraft Wiki is the project to create a comprehensive source of information for everything about the Dogcraft Server, website and community of ReNDoG, that can be edited by all Cyberdogs, available as part of Dogcraft.net in the form of a wiki. Founded as a Wikia page in June of 2018 by prominent community member and player

William278, the project was met with a positive response. By September of 2019, the Wiki was made an official service on Dogcraft.net and continues to grow as it is edited by Cyberdogs.

Initially hosted as a Wikia site (later renamed to FANDOM), the project was launched on the 30th of June, 2018 in a discord for the Survival Railway Network by player

William278 as a start of a push to document the history of the server. Before the launch of the Wiki Project, historical recording of Dogcraft was poor, being limited to the increasingly deprecated forums and information for new players on the site was outdated. These factors led to the idea to create an easily accessible and editable Wiki to record information. This would serve as a place to learn the history of the server and find information about it, thereby fulfilling the needs of both new and veteran players.

The Wiki was quickly popular among builders of the SRN and spread to other members of the community. A discord was created to help organise editing efforts and William appointed SRN Conductor

darparniox in February of 2019 to assist with administration. Near the middle of the year, the two drafted a plan to make the Dogcraft Wiki official and submitted it to the Head Moderators. The plan was approved and on the 6th of September, 2019, the wiki was migrated from the FANDOM site to the Dogcraft.net website and was made an official service of the site. In October of 2019,

Domino_1 was also made a Wiki Administrator to assist with the transition and continue to curate high-quality Wiki articles. To mark the end of the year and the start of 2020, a special reflections event was held to get players to write articles.

In March of 2020, the Dogcraft.net website underwent an overhaul and following consultation between site and Wiki Administration, the current site and wiki were changed to be much more closely integrated. For instance, Wiki and Website accounts were merged to make it easier for Cyberdogs to edit the project and a search bar was added on the main page, with further improvements made, particularly to the account system, in the website's December 2020 refresh. 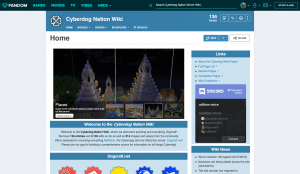 The original main page of the Cyberdog Wiki Project

"It would be impossible for me to do this alone, so I would like to ask anyone here for your help!"

One of the key pillars of the project has been the ability for anyone to edit it, allowing changes to be made quickly and easily.

As Dogcraft evolved from its' origins as a Forum for ReNDoG fans into a wider community and Minecraft server, the forums would decline in popularity as members opted to use Discord for its simplicity. This came with a sacrifice, however, as the forums had previously served as the central location for discussion of projects, such as the Survival Railway Network; meaning there was no longer a widely used, central place to write information and record detailed updates/events. Furthermore, pages such as the FAQ and guides on the site had become highly outdated as only very few people had the technical means to easily update them. The decision was made therefore, independently of staff, to start what would become the Dogcraft Wiki in order to fulfill this purpose and that it should be freely editable by anyone who wanted to so that its' improvement and growth could be a community effort.

Initially, Wikia accounts were required to edit the Dogcraft Wiki, however with the Wiki's move to Dogcraft.net, it has been freely editable through the use of regular Dogcraft accounts. Cyberdogs are encouraged particularly to write about their builds and bases they have made on the server and to improve other articles with more information. Although there is no end goal in particular for the Dogcraft Wiki, every edit brings it a step closer to being more useful in serving its' purpose. To encourage editors, Wiki administration staff have held a few events, notably the annual Wiki Reflections event.