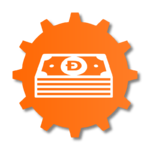 Dogcraft Dollars (Ð), commonly abbreviated as DCD, is the monetary system used by the Dogcraft.net community and Minecraft server. Every registered player has a Dogcraft Dollar account, which can be accessed via the /balance command.

Dogcraft Dollars can be used to buy items on the Dogcraft Server. In-game, they are used with the shop plugin to automatically pay other players for items acquired from their chest shop stores. DCD can also be transferred directly between players using the /pay command. DCD can also be used in-game to purchase homes, claim blocks, and other cosmetics for the Hub.

Players earn DCD for every hour which they spend on a survival server from a special system called DCD Boost. The default boost rate is 10 Ð/hour, however this can be increased by server-wide boosts activated by Patreons. Historically, the server boost has fluctuated dramatically, with a peak of 17,000 DCD around the launch of Survival 3 which led to significant economic uncertainty. To fix this, at the start of the Survival 4 world the boost rate was fixed to be based on ReNDoG's monthly patreon income.

As of November 2018 the only way to improve the boost rate is by becoming a Patreon. Previously boosts could also be bought for real money on the website. This change was made with the hope that it would stabilize the in-game economy. In the past, there were also a number of other means of acquiring Dogcraft Dollars. This included direct monthly Patreon rewards, playing minigames, and accomplishing various quests. 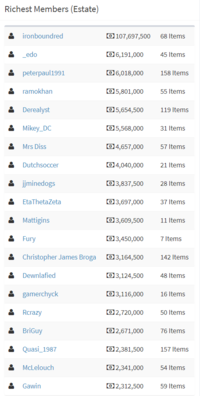 At the start of the Survival 3 world, Dogcraft Dollar balances were reset for all players, however this only affected the Pocket list, as purchases made from the website before the reset were kept.

At the start of the Survival 4 world, Dogcraft Dollar balances were once again reset for all players, this time also resetting previous purchases from the website including homes and claim blocks. This provided every player with a clean slate and equal footing after the transition to the new website and server.

Besides bartering, Diamonds are commonly used as an alternative currency. This is encouraged by the server, as there is a rule which fixes the price of a pair of Elytra Wings so that they can only be sold in exchange for 200 diamonds. In addition to this, a rule is in place that restricts the sale of diamonds to a minimum of 200 DCD per gem.

Player-made attempts at using other currencies have also been attempted. For example, on Survival 2 administrator Brianetta created a bank to try to stabilize the value of diamonds before the rule was introduced.