Akkara City, or simply Akkara, was a major settlement on the Survival 2 world and considered to be one of the largest cities on the server. The city was based on the ruins of an ancient Mayan settlement long abandoned but later rediscovered by European colonials, giving the city a unique blend of Colonial and Aztec architecture.

Following the announcement that a new Survival world would be launching in September,

William278, the founder and mayor of Lackria City on Survival 1 at the time suggested to his in-game neighbor

LAK3RS, who was a server pioneer and accomplished builder the idea of collaborating to create a unique city combining their skills in the new world.

LAK3RS loved this idea and planning began for the city. 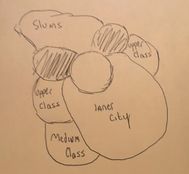 The original idea for the city was to create a large mountain structure and layer the city around the mountainside, with different sectors of the city housing different buildings. It was soon decided to build three large temples in the center to further flesh out the lore of the area and the Mayan/Aztec theme came from this initial plan.

It was initially proposed by

William278 to call the city 'Uxtrakala', a portmanteau of ancient Mayan settlements Uxtrak and Zelda region Akkala however this name was deemed too long and was later shortened to 'Akkara'; the final name of the city. It was at this time where TraktorMC, former Lackria co-mayor was invited to work with the two.

Construction on Akkara began on the 2nd of September, 2017, on the first day of the new Survival 2 world. The original plan for the city was to terraform a large plains biome relatively close to spawn into the city, however at the last minute it was decided to build the city at 0, 0 and the three landed their boats on the area today known as Laker's Landing.

A shot from Laker's Landing prior to the commencing of terraforming work.

Construction took six months, from start to finish and the opening of the city was delayed several times. The main factor cited for the delays was the extensive terraforming work that was required to turn the hilly terrain into the final area present today. Several features of the original generated geometry were kept, however, such as the cove and island shape of the Harbor District. 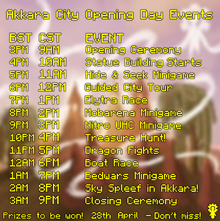 The itinerary posted for the Akkara City opening day.

One week prior the opening event, the Akkara mayors worked with the Cyberdog Events Committee to make final preparations for the event. The itinerary for the day was also solidified and the final work for the events was planned (on the right).

One day before the event, it was confirmed that ReNDoG would make a guest appearance during the day. The official opening of the city was led by

William278 and Akkara City was officially opened by the mayor to the public at 3PM BST on the 28th of April, 2018 from the city's station. Twelve hours of events would follow with Ren streaming a live tour of the server on Twitch at 11PM BST later that night followed by celebratory UHC games. The ceremonies concluded with a closing speech and prizes were handed out for the various competitions. 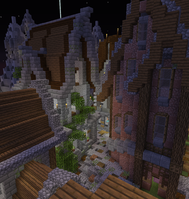 View of the city's main street at night.

Akkara adopted a Colonial/Tudor style of construction, with an emphasis on stone and wood-based buildings to complement the historic Mayan structures. The heavy usage of these materials led to the city gathering a reputation for being a 'Stone City'. To compensate for this, the mayors encouraged builders to add foliage to builds and constructed many trees and bushes to exaggerate the cities' overgrown aesthetic.

In addition, different districts within the city were given alterations on the standard building codes, offering builders different challenges when constructing their homes. For example, The Ridge district in Akkara offers builders diagonal plots. This further helped create variety, though the heavy emphasis on creating advanced builds affected the cities' navigability, in heavy contrast to other settlements like Havana.

Akkara City was led by the three Mayors;

LAK3RS, the Mayor for building;

William278, the Mayor for management and

Rhyvin, the Mayor of Redstone. Following a large period of inactivity, the decision was made to remove

Rhyvin was appointed the new position of Mayor instead.

In addition to this, Akkara had two District Managers to help manage the city districts;

_gewoon_iemand_, who managed Akkara Heights and the Woodland District as well as

Broga_, who managed for East Akkara, the Southern Peninsula and the Northside Valley. 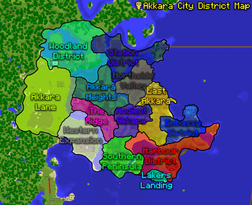 Akkara City was divided into thirteen districts, with each district having its own variant on the city building code and regulations. Every district had a letter-code used for plot identification as plots were assigned a plot number and district code for organisation.

Not every district had plots available, though. Districts such as Laker's Landing and Ancient Akkara for example were reserved for special builds only. The district system led some players to become attracted to their home district with players often purchasing multiple plots in a district, as was notable in East Akkara and the Northside Valley with

Akkara housed many notable builds and locations on the Survival 2 world.

As with the rest of the Survival 2 world, Akkara City closed on the 20th of October, 2018 to make way for Survival 3 and the update to Minecraft 1.13: The Update Aquatic. Many world downloads were made of the city, preserving it in its final state on that day. The announcement of the new world left the mayors unprepared as there were still many plans for the city that were never completed.

A large PvP arena to the east of the city was planned to hold battles and was never completed. The City Hall was also never completed, with only the external facade complete at the end of the server. Even the Temples of the Gods were never finished internally, despite being the centrepiece of the city, with only the external appearance complete. After drafting some plans, the three mayors announced the start of the Deliverance as a successor to Akkara. William278 would subsequently leave that project and found Ouranos, while