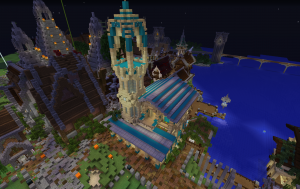 The City of Havana's embassy in Akkara.

Embassies are special buildings that are made to honor another settlement or base within another base. They typically house maps, information and details about their home and are built/managed by their respective base owner.

The practice of building embassies for one's place on Dogcraft first began back in Survival 1. The first example of this phenomenon is

blued0g 's small settlement; "The Oasis " in Spawn City. Much further into the Survival 1 world, unwittingly, Lackria owner William278 built an embassy ship inside Valhalla; another town on the server. These are the only known embassies on the world.

The idea grew to popularity on the Survival 2 world with the first embassies in the world being planned and built by the cities of Havana and Akkara on their grounds. With this, the tradition of embassy construction grew in popularity, spreading to other notable settlements on the new world such as Quasi's District, Nepolis and Wanigoora.

The concept of embassies had endured during the current world, Survival 3. Embassies first appeared in Ouranos and Chronia, with other towns such as Dragon Valley and Barkenstein adopting them later on. The practice of building embassies in towns remained a gesture of goodwill between base owners and was an interesting result of subculture on the Dogcraft server.