"This is insane, you guys have made a little civilisation out here!"

Lackria, also known as Lackria City, was a prominent, community-based city on the Survival 1 world that was home to a wide range of homes, shops, services and attractions. Lackria was founded on the 2nd of June, 2016, by new player

SENsationals02 along a private extension line of the then-new Survival Railway Network owned by TTAR1. The city would see rapid growth shortly following its founding and would cement itself as an icon of the original Survival world. 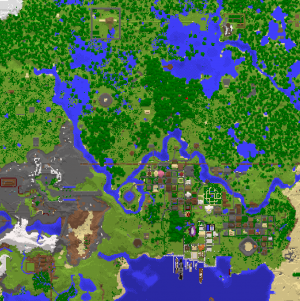 Lackria was founded on the 2nd of June, 2016 after player William278 found a spot for the city while riding along a base line to player TTAR1's base. After recruiting player SENsationals02 in chat to help flatten the nearby terrain, a crude station was erected along the old rickety line helping the city to attract new players. The station featured a grey Andesite design and lacked a standardized SRN minecart terminal.

Plots and basic paths were then built to let players build in the city as more people were invited over chat. The small adjacent plots and access to a nearby mine was inviting to new players and many long-time players would be introduced to the server when they joined Lackria. Soon, farms were built including the city's landmark Cactus Farm. In an effort to boost the city's popularity, Elytra Race events were hosted at the city, with the first event starting at the new Mesa Station. Due to a period of inactivity, mayor SENsationals was then replaced by

MrAnonymous25, who himself would later be replaced as a mayor by player

Eventually, Lackria Station was upgraded to celebrate its rapid growth by _edo and William278, connecting the city to the NTN with a hot-air-balloon, and the track was re-routed as a main line railway connecting with East Station. Over time, many important community builds were made in the city, such as the Events Team's headquarters and the Lackria Arena. 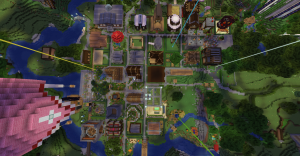 An overhead view of the city, showing it's layout.

Lackria lacked an official build style or any cohesive plan, but a general medieval theme was taken by initial residents. The city was later divided into several districts, including a modern "Light" district and another housing district following a boom in visitors to the city following a base tour with ReNDoG, which was uploaded to YouTube on the 6th of November, 2016.

The rapid urban growth in the city led to the city evolving organically over time, sprawling outwards from the initial station all the way to the coast. This can be attributed to the lack of communication within the city as it did not have a Discord server or forum thread at the time. 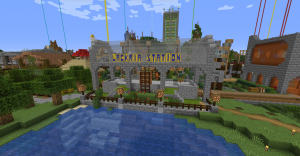 Lackria Station, backing onto the waterfront 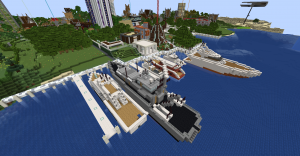 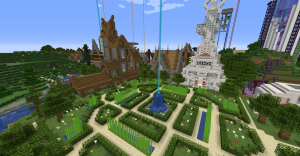 Lackria Gardens, showing the casino (to the right) and mayoral mansion (to the left) 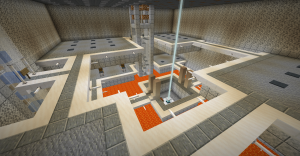 A view of the secret laboratory. It could be accessed from TraktorMC's underground area.

After the opening of the Survival 2 world, Lackria was closed as the new world brought new opportunities. However, the city went on to inspire many future town and city projects leading to a surge in the construction of player-built settlements across the server.