South Border Station (Survival 3) was a build on the Survival 3 world of the Dogcraft Server.

This station was built in celebration of

Broga_. Special thanks to

SummerFlower1234 for the house design and

EtaThetaZeta for the insane, but simple Redstone for the SRN tracks receiving and going center.  This was a project that pushed 1.13 texturing to its max in a beautiful way. There were 3 levels to this build; the floating islands, the main island, and the waters. The floating islands were decorated as a lush living space held together by a black tower on sea island. Below the tower was the main island which within its rocky exterior held the station center. The island's waters held some secrets and fun hidden places as well. This build also had a mini game attached to it. 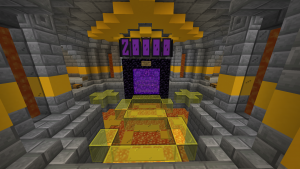