The SW Winter Line was a Survival Railway Network branch line in the southwest region of the Survival 3 world. It was intended to link up the southwestern areas of the server to encourage development of this quadrant which was perceived to be lesser in population.

The SW Winter Line was first conceived by

expedtadam after he noticed that the southwestern area of the SRN map was noticeably empty. To make the southwest of the server more connected, expedtadam drew plans showing hypothetical links to locations on the map. The project was largely inspired by the NW Avalanche Line and the developmental roads of outback Australia. 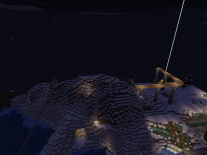 Holiday Station was originally a planned station connecting Relleka and Jello stations. It was expected to be a viewing platform in Holiday City's winter area. However, due to time constraint, its location only served as a scenery changing point between Relleka and Jello Station. 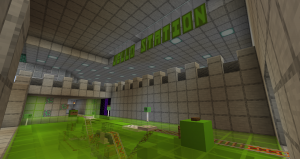 Located in a swamp area, Jello station had its surroundings transformed into a beach, the slime beach. It was an underground station embedded in Holiday City's summer area. Travelling from Relleka station and passing through the snow biome, the rail changed from wooden to glass, mimicking a ride through air. There were colorful hot air balloons accompanying the travel. It was built by 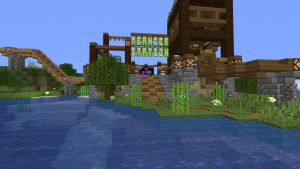 Built by expedtadam, Meander station was inspired by open air marshland dwellings. Additional help for the station came from maltj465. The name of the station was derived from the winding natural terrain generation similar to meanders and billabongs. South of Meander, on the line to Cloud Station, was a musical railway which played Bach’s Crab Cannon from "The Musical Offering" built by

This station was designed by Lolzman42 and was based on the Mos Eisley Cantina featured in the film "Star Wars - A New Hope" as if it were in a plains biome.

expedtadam, the station served the location of the February 2019 and August 2019 Build Battles. The build was designed to take in design elements from both battles, featuring red colours representing both “Valentines Day” and “nightmare”. 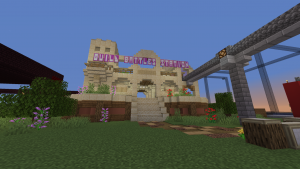 Built by Aeghu at his base.

This station was still under construction at the end of Survival 3.

This station was still under construction at the end of Survival 3.

mr_e12345 using a design based on a ski resort, notable for its large bridge. 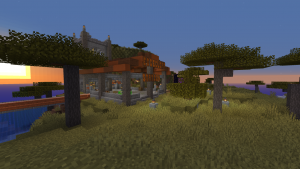 expedtadam using a design with a semi-arid tent as inspiration. Contained an unused Branch Line connection reserved for Skelleton123.

expedtadam, it was designed to be a discreet watching post in which guests could observe animals. This station was built by

The station for Ratanga Junction, designed by mr_e12345 and built by

fangsofamber, served as the jumping off point for future expansions, namely to Smokey Cove.

splittingadams, it was situated at his base. It is named “Wilder” after the late famous actor Gene Wilder. To the north was a tunnel splittingadams decorated in an extremely ornate way.