Antibean HQ was a prominent building in the Survival 3 settlement of Ouranos. It was well known for its somewhat infamous and publically played out backstory and had been one of the most pranked locations around of the server.

The plot of land Antibean HQ sat upon was one of the first set out during Ouranos' development, and the building was clearly within sight of the city hall and station in Lackria Plaza. The plot was purchased by

Around this time, in social circles of the SRN,

William278, a SRN line manager and a mayor of Ouranos, had begun to make highly regular use of the phrase 'Cool Beans'. The revival of the phrase from an earlier introduction in 2018 by

During February, William278 continued to propagate the phrase, culminating in building a map art containing an image of three so-called 'Cool Beans'. This drew much ire, and two other players well entrenched in SRN social circles,

Over the course of three days, the duo created Antibean banners and a graffiti style map art that depicted the cancelling of a 'Cool Bean', both of which they copied hundreds of times. In addition, an existing design for the aforementioned Ouranos plot of marbou9's was modified to become the new 'Antibean HQ'. They acquired permissions for the main Ouranos claim from another mayor of Ouranos,

Once prepared, the duo built the Antibean HQ design in Survival over a few hours whilst William278 was offline, and placed Antibean signage and graffiti around the city. William278 later logged in, discovered the actions taken, and admitted defeat on behalf of Cool Beans in reaction. This sequence of events was sometimes known as the 'First Bean War'.

The town was later cleaned up and the decision made that Antibean HQ could remain as a permanent fixture in Ouranos. Since, it has been the subject of numerous friendly pranks, including being filled with anvils, diorite, and having crafting tables placed as its facade. 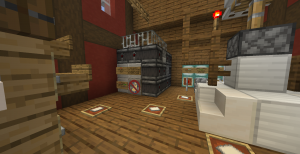