The Mall Ghosts are a small group of three members of the Dogcraft community who gathered together on a variety of occasions in order to enjoy the frivolities of the different malls throughout Survival 4. These players also generated a structure that was used to hold their meetings and plan future events.

The Mall Ghosts came together for the purpose of occasionally scaring other players, though the main intent quickly changed into hosting engaging games of Hide & Seek in various malls across Survival 4. The pranks and shenanigans that occurred from the hands of the Mall Ghosts ranged from simple spooks in unexpected locations to elaborate, confusing events throughout large builds. A majority of these pranks took place at the Northwestern Shopping District of the Husky server, as it was generally considered the most popular mall during the time period that the Mall Ghosts were active. When this shopping area became irrelevant following the change to the Official Mall, the group moved their games into the new mall. However, the inability to deal damage to other players and the lack of open space in this mall made their main form of Hide & Seek as well as their pranks more difficult to execute, which led to the inactivity of the group shortly after.

The idea of this game is relatively simple, though it does require some resources in order to play. At least two people are required for the game, and one must have a supply of invisibility potions. Both players must own an elytra, and while armor is not required, it is advised to wear it for safety. Fireworks are required for aerial escape and/or combat by both parties, and Tridents with the Riptide enchantment also provide a crucial advantage if the game is occurring near any body of water. Food items can be carried by both teams, though the food item of choice should not have a significant saturation so that regeneration is more difficult than usual. The game simply starts by the players being split into two teams: The Ghosts and The Hunters. For most games, there is a low number of ghosts in comparison to hunters to allow the hunters to search the provided space more swiftly. For example, if a game as four players, one of these players would be the ghost, while the other three would be hunters.

The ghost's objective is to stay away from the hunters until the time runs out or until it successfully kills all of them. In order to survive, (and slay the hunters if the ghost chooses to) the ghost is equipped with a sword / axe and 3 to 6 splash potions of poison, as well as the other materials that were listed previously. The ghost is not provided with a bow, as it would be far too advantageous to shoot hunters from a faraway hiding spot. In the most basic format of the game, the ghost stays invisible for the full duration of the game and wears an elytra and a phantom / vex head to reveal their presence. They are allowed to take off the elytra in order to blend in, though the head cannot be removed. In a more complex edition of the game, the ghost is permitted to unequip their head of choice, therefore forcing the game to be more difficult for the hunters. This separate mode also provides the ghost with armor (only boots and leggings) that it can equip if it chooses to kill the hunters in order to win, which poses an even more significant threat to the hunters. The ghost needs to remember that it owns this armor though, as it is much easier to locate while it has that equipped. It is important to specify which game mode you desire to play before beginning the game, as you may find yourself searching for a ghost with a head who does not always have one on. Aside from this extra mode, the ghost is meant to strategically hide from the hunters by placing itself in an area that most people would not think to check. If the ghost also has good PVP skills, they may be able to maintain different hiding places for most of the game while eliminating any hunter who happens to find them. The ghost team is much smaller than the hunters for this reason.

The hunter's objective is to hunt down the ghost and eliminate them. If a hunter is slain by a ghost, they must wait a set amount of time to be placed back into the game. This time usually spans to about 10 minutes if the game is set to last for 30 to 40 minutes. If the ghost manages to slay all of the hunters within this timeframe before another hunter reenters the game, the ghost wins. Therefore, the hunters should try their best not to die to the ghost so that the ghost is either forced to die or win by time running out. Hunters will have a full set of armor with the exception of the chestplate, which will be replaced by an elytra. The hunters will have a relatively low power bow to combat the escaping and invisibility of the ghost, as well as a sword / axe. The hunters also have one normal golden apple that can be used in an emergency, though it is important to keep in mind that this apple does not regenerate if a hunter dies and returns to the game. In the advanced edition of the game, this apple can be enchanted so that the changes to the ghost's abilities are less prevalent. Hunters can either group together when searching for the ghost or split up, though they should keep in mind that splitting up may allow an aggressive ghost to pick off the hunters one by one.

The Mall Ghosts sprouted as a concept from an interaction between

Aussie_Alexx in the Northwestern Shopping District on a day in late April of 2020. They gathered together most of the players in the immediate vicinity of the mall at the time and threw together some basic rules for the minigame that became what is listed above. Equinox posed as the ghost while Aussie and two other players chased after her, weaving through the buildings in pursuit. Due to Equinox's speedy playstyle, the hunters spent most of the game trying to chase her instead of seeking her, which was not made as the purpose of the true game for the reason that many players would rather not waste nine stacks of fireworks. Many other Mall Ghost events broke out in the months following this one, and soon after

DatFunkyMan joined the fray. This led to the start of the construction of the "Mall Ghost Evil Base," which was intended to be a large underground structure with a mostly purple and black pallet. This construction went smoothly for some time before the project was abandoned by all three members in favor of other Dogcraft builds, though the group still occasionally reunites in the large hallway that was mined out tediously. Today the Mall Ghosts remain in constant communication via other games, though they are excited to make a comeback at some point during Survival 5.

The Mall Ghost base was planned to consist of one large hallway that split off into three rooms: one with a large, automatic potion brewing system, one with basic base requirements, and one even more expansive room with a small meeting table in the middle and nothing else. This last room was not going to have anything aside from this meeting table to represent the foolishness of the group, though sadly this room and the other two side rooms were never constructed. After the project was forgotten, the base contained a piston door entrance to a miniature hallway with a bubble elevator. This elevator led down to the colossal underground area that was carved out for the hallway, though only some decorations were implemented before the project was scrapped. There are a plethora of other less important rooms that were made for various purposes that will be listed below alongside the other main rooms. For curious readers who may wish to inspect some of these attributes for themselves, the coordinates of the base are -4198 64 -2064 on Beagle. 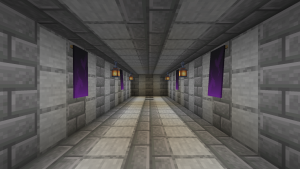 The 'Smallway' in the entrance to the Mall Ghost Base.

Aussie_Alexx's central base. A small pond changes to a path that appears rugged and old. This path is dotted with wooden streetlamps that illuminate the path until it reaches a honey block piston door. This door was originally planned to have a passcode that was required to open it, but the group decided that they would do this after they had finished the rest of the build itself, which obviously never occurred.

A small hallway expands once the piston door is opened, revealing a basic hallway with a bubble elevator at the far end of it. This elevator can change between up and down by the pressure plate in front of it, which will toggle it between these two options. This elevator leads down into the centerpiece of the build: the grand hallway. 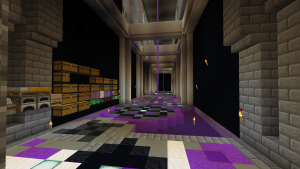 The colossal hallway of the Mall Ghost Base.

The central, grand hallway of the build was where almost all of the labor took place during the project's prime. The left of the hallway is primarily covered in chests and crafting stations that were originally meant to be temporary, yet since the project was never completed, they still remain there currently. A purple, gray, white and black pallet adorns the concrete and bricks that fold into the walls of this hall. The floor is additionally embroidered with a variety of designs using the aforementioned color pallet, though this ongoing design does not stretch the entire length of the room. This half-complete build stands as a monument to the Mall Ghosts more than anything, as it represents their lack of dedication towards projects that they did not start by themselves.

A small, automated wool farm sits behind the redstone used to power the elevator which helps to produce wool for some of the many floor designs. The sheep here have not seen the light of day in years, and likely will not ever again. The group has claimed that they feed the sheep positioned here well, though there is no other evidence to support this possibility.

In a corner of the room behind the redstone used for the elevator, a trapdoor can be seen. This door leads to an elaborate maze that was created by

AcroBoyGaming, who visited the Mall Ghost Base once and generated this tunnel system unbeknownst to the three mall ghosts. They later discovered this maze upon hearing a piston rapidly firing in the walls of the grand hallway, and they all scattered throughout it to find what was waiting at the end. Players who wish to attempt this maze can do so once Survival 4 becomes a world download, as permitting access to this maze currently would imply that players could destroy anything within it. A list of what is within this maze will not appear on this page to encourage players to attempt the maze themselves.